On Tuesday President Obama announced a series of executive actions to reduce access to firearms in efforts to improve public safety. Consequently it might come as a surprise that one of the president’s core constituencies—the millennial cohort—is not overly enthusiastic about gun control.


The Pew Research center has consistently found that millennials are no more likely than older generations to agree that its more important to control ownership than protect the right of Americans to own guns. 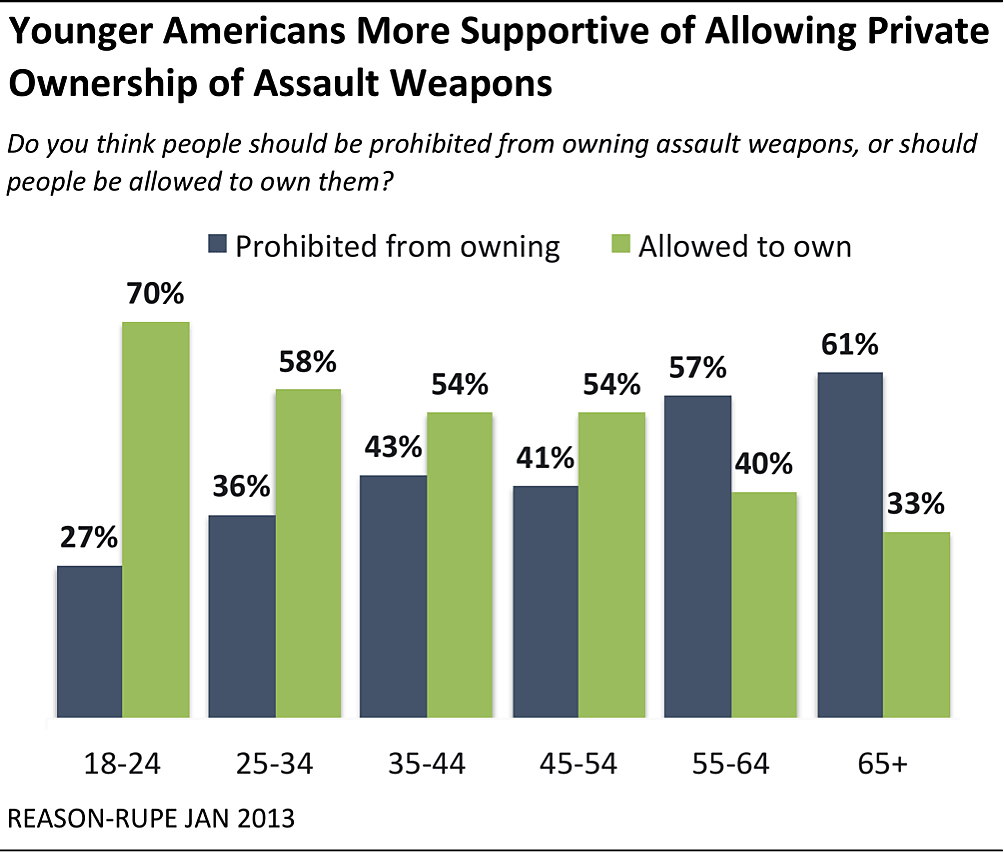 In fact, a Reason‐​Rupe poll, that I helped conduct in 2013, found that millennials were the least likely to say that government should prohibit people from owning assault weapons: 63% of 18–34 year olds thought people should be allowed to own assault weapons, compared to 54% of 35–54 year olds and 36% of those 55 and over.


Furthermore, Gallup found that millennials were slightly less likely than older Americans to support stricter laws “covering the sale of firearms” (49% versus 56% of those over 55).


These results may seem puzzling since young Americans are less Republican than older cohorts, but it’s Republicans who tend to be less supportive of gun control measures.

In addition, millennials are less likely to own a firearm; Reason‐​Rupe found millennials were half as likely to report owning a firearm as those over 55 (11% versus 22%). However, people who don’t own firearms are more likely to support gun control measures. For instance, in the same poll a majority of gun owners opposed an assault weapons ban while a majority of non‐​gun owners supported a ban.


Nevertheless, their social liberalism hasn’t translated into their being liberal across the board. They are not significantly different from older cohorts on a number of issues, including attitudes toward business, the social safety net, and they are more supportive of entitlement reform (see here, and here). Furthermore, they take a more laissez faire approach to allowing products and activities that many have sought to ban or restrict.


Despite their Democratic sympathies, millennials’ more permissive approach to lifestyle choices and access to products and activities might at least in part explain why they are not more enthusiastic about gun control.