In my misery index, I calculate a ranking for all countries where suitable data exist. The misery index — a simple sum of inflation, lending rates, and unemployment rates, minus year‐​on‐​year per capita GDP growth — is used to construct a ranking for 108 countries. The table below is a sub‐​index of all Middle East and North African (MENA) countries presented in the world misery index. 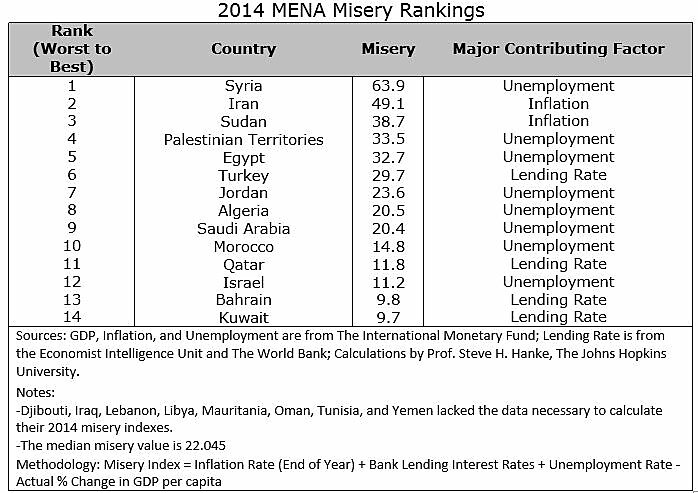 A higher score in the misery index means that the country, and its constituents, are more miserable. Indeed, this is a table where you do not want to be first.


Syria and Iran were the most miserable in the region. War and sanctions have taken their toll. Bahrain and Kuwait are at the other end of the spectrum, with low (read: good) misery index scores.


Two points worth noting are somewhat related. First, the majority of countries in MENA have elevated misery index scores – scores above twenty. These poor scores indicate structural problems that require serious economic reforms. The second point, as indicated in the notes to the table, is that the governments in eight MENA countries were not even capable of producing the basic data required to calculate a misery index score. This represents government failure and suggests a lack of capacity to implement structural economic reforms.