Transit ridership at the Santa Clara Valley Transportation Authority (VTA) has declined in every year since Nuria Fernandez was made CEO of San Jose’s principal transit agency at the end of 2013. By 2019, transit fares collected by VTA covered just 9 percent of operating costs, far lower than the national average of 32 percent. VTA light‐​rail cars carried an average of just 14 passengers, compared with a national average of 24. Most San Jose light‐​rail “trains” are just one car long, meaning they could easily be replaced by buses at a huge savings to taxpayers. 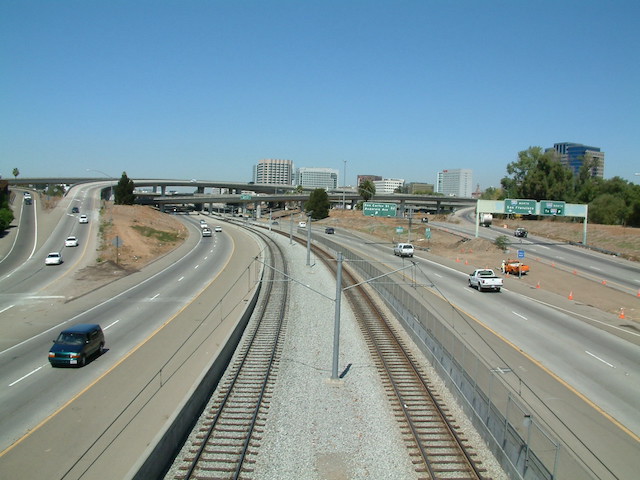 VTA light rail: a model of government waste. Notice the HOV lanes that could have supported buses carrying more people to more destinations than the light‐​rail line.

Before Fernandez arrived, VTA had spent billions of dollars building a light‐​rail system that did nothing but jeopardize the agency’s finances, which in turn contributed to the dramatic decline in ridership: Between 2002 and 2019, the region’s population grew by 15 percent yet transit ridership fell by 29 percent. While she didn’t make the decision to build those light‐​rail lines, she is proud that she was able to get federal funding to help build a subway line into downtown San Jose.

Downtown San Jose has less than 3 percent of Silicon Valley’s jobs, making the region profoundly unsuited to rail transit, which is primarily designed to bring large numbers of people into downtown job centers. Meanwhile, VTA and other regional bus service is so bad that Apple, Facebook, Google, and other companies have hired their own fleets of buses to bring employees to their work centers.

If VTA had focused on buses instead of rail construction, it could have provided some of that transportation. Apparently, Fernandez and VTA’s board agree that the agency’s main mission is to create construction jobs and contractor profits, not to safely move people around the region.

Under Fernandez’ management, VTA’s response to the pandemic has been lackluster at best. When the state of California issued mandatory directives to transit agencies to protect employees and customers from COVID-19, Fernandez told the VTA board of directors that the directives were “just a guidance” and didn’t have to be followed in detail by VTA. After two VTA employees died of the virus, the state of California to fined the agency for health and safety violations because VTA failed to ensure that passengers and employees wore masks. VTA has also failed to install the best‐​available filters into its bus and railcar air circulation systems.

Given Fernandez’ track record and President Biden’s love for obsolete passenger rail transportation, it is no surprise that Biden nominated her to lead the Federal Transit Administration. As FTA administrator, Fernandez will become the chief cheerleader for Biden’s proposal to spend an additional $85 billion on transit. This will give many other transit agencies the opportunity to become more beholden to rail contractors than to transit riders. Transit ridership is likely to never recover after the pandemic, but under Biden and Fernandez, expensive transit expansions will continue whether anyone rides transit or not.