Last week I participated in a conference in the city of Rosario, Argentina, on the 20th anniversary of the local Fundación Libertad. The event gathered the most prestigious representatives of Latin America’s classical liberal movement and it was a unique experience sharing three days with such enlightened minds.

The only downside was the encounter we had with a group of leftist strikers on Friday afternoon, when the bus we were riding was intercepted in the Ché Guevara plaza (coincidence?) by at least 150 thugs, who stoned and destroyed the vehicle. Among the people in the bus were well-known writer Mario Vargas Llosa and my Cato colleague Gabriela Calderón. It was a very tense and unnecessary moment, given that the group attacked us without any sign of provocation.

Fortunately nobody was hurt during the incident. Nevertheless, this situation reflects the degree of intolerance and violence which characterizes the Latin American “carnivorous” left, to paraphrase the authors of El Regreso del Idiota Latinoamericano (The Return of the Latin-American Idiot), also participating in the event in Rosario. These people are willing to use force against those who think differently, and it gets much worse when they manage to attain power, as they have in Venezuela, Bolivia and Ecuador, where they can deploy the repressive apparatus of the government to their own ends.

This is a picture I took during the attack: 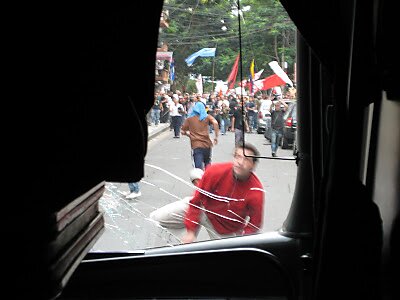