State budgets face numerous long‐​term pressures, including overpromised and underfunded pensions. Another challenge is Medicaid, the health insurance program for low‐​income individuals, which is growing rapidly in cost and enrollment.


The below chart shows the growth in state Medicaid spending over the last ten years: 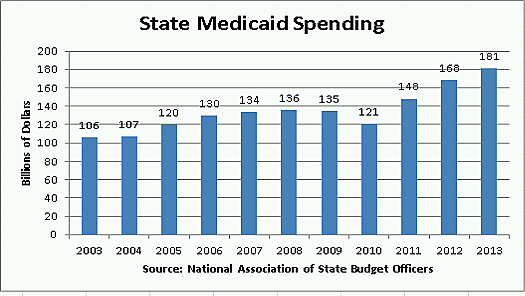 The higher levels of Medicaid spending are crowding out spending in other state budget areas, such as transportation and education, while also creating pressure to increase taxes.


In the newest edition of the “Fiscal Policy Report Card on America’s Governors: 2014,” Chris Edwards and I discuss how the president’s health care law is poised to make this situation even worse for state budgets:

Medicaid has grown rapidly for years, and the Affordable Care Act of 2010 (ACA) expanded it even more. Individual states can decide whether or not to implement the ACA’s expanded Medicaid coverage, but Congress created strong incentives to do so. The federal government is paying 100 percent of the costs of expansion through 2016, and then a declining share after that, reaching 90 percent by 2020. The Congressional Budget Office (CBO) estimates that Medicaid expansion under the ACA will cost the federal government $792 billion and state governments $46 billion over the next 10 years.


Even with the federal government paying most of the initial costs, the ACA will put a large strain on state budgets down the road. State policymakers are concerned that Congress will reduce the federal cost share in coming years because federal deficits will create pressure to cut spending. Without reforms, CBO estimates that federal Medicaid spending will almost double from $299 billion in 2014 to $576 billion by 2024. The growth is projected to be so rapid that even President Obama has suggested that Congress decrease the federal cost share.


The expansion of Medicaid under the ACA is bad policy for numerous reasons, and many governors are refusing to go along. Currently, at least 21 states have decided not to go along with the expansion. Those states may lose “free” federal money in the short‐​run, but leaders in those states may be saving their states from huge fiscal burdens later on.