Measuring Progress on Violence against Union Members in Colombia

During a recent Congressional hearing on President Obama’s trade agenda, Rep. Sander Levin (D-Mich.) stated his continued objections to the FTA with Colombia:

“Union worker violence in Colombia remains unacceptably high - if not the highest in the world. Limited progress is being made in the investigation and prosecution of those responsible. Additionally, reports indicate that threats against union workers and others have increased, and there has been little concrete action today to pursue these cases.” [Emphasis added].

Levin warned that, despite signs of a more constructive approach to this issue from Colombia's new president Juan Manuel Santos, “The only adequate measuring stick is progress on the ground.”

Rep. Levin should take a look at the Free Trade Bulletin that my colleague Dan Griswold and I published this week: "Trade Agreement Would Promote U.S. Exports and Colombian Civil Society." When it comes to progress on the ground regarding violence against union members, Colombia already has a remarkable record. The number of assassinations of trade unionists has dropped 77% since its peak in 2001, compared to the total number of homicides in the country, which declined by 44% in the same period. 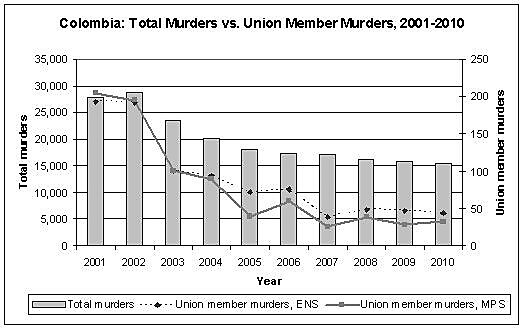 In our paper, we present evidence that shows that union members enjoy greater security than other vulnerable groups of Colombian civil society, such as teachers, councilmen and journalists. Also, we highlight research conducted by economists Daniel Mejía and María José Uribe of the Universidad de los Andes in Colombia, which found no statistical evidence supporting the claim that trade unionists are targeted for their activities. Instead, their results show that “the violence against union members can be explained by the general level of violence and by low levels of economic development.”

As for Rep. Levin’s claim that there has been “little concrete action” to pursue crimes against trade unionists, once again the evidence says otherwise. In 2010 there were over 1,400 trade unionists under a government protection program—more than any other vulnerable group of Colombia’s civil society. In 2007, a special department was created in the Office of the Prosecutor General dedicated exclusively to solving crimes against union members and bringing the perpetrators to justice. Close to 85 percent of the sentences issued since 2000 for assassinations of trade unionists were issued after the creation of this department.

If Rep. Levin’s “adequate measuring stick is progress on the ground,” then he should recognize the tremendous achievements made by Colombia so far in reducing violence against trade unionists, and solving the crimes committed against them.

You can read the full paper here.