In my misery index, I calculate a ranking for all countries where suitable data exist. My misery index — a simple sum of inflation, lending rates, and unemployment rates, minus year‐​on‐​year per capita GDP growth — is used to construct a ranking for 108 countries. The table below is a sub‐​index of all Latin American countries presented in the world misery index. 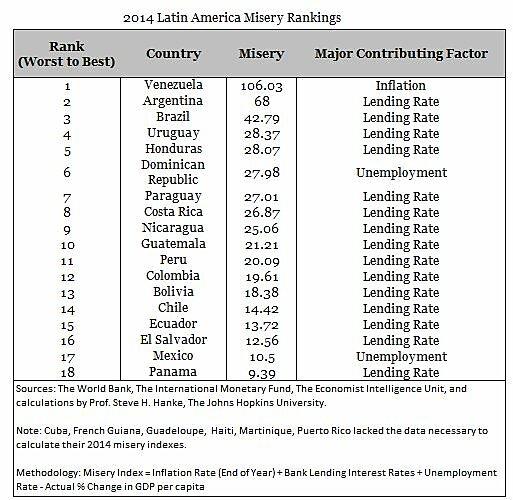 divA higher score in the misery index means that the country, and its constituents, are more miserable. Indeed, this is a table where you do not want to be first.


Venezuela and Argentina, armed with aggressive socialist policies, end up the most miserable in the region. On the other hand, Panama, El Salvador, and Ecuador score the best on the misery index for Latin America. Panama, with roughly one tenth the misery index score of Venezuela, has used the USD as legal tender since 1904. Ecuador and El Salvador are also both dollarized (Ecuador since 2000 and El Salvador since 2001) – they use the greenback, and it is clear that the embrace of the USD trumps all other economic policies.


The lesson to be learned is clear: the tactics which socialist governments like Venezuela and Argentina employ yield miserable results, whereas dollarization is associated with less misery.