Marriage Policy Is a Mess. Here’s How to Make Sense of It.

Give Rand Paul points for trying: His opinion piece about marriage policy in the wake of Obergefell did better than many other Republicans have done. He did not call for resurrecting the dead – and politically toxic – Federal Marriage Amendment. He would appear to be actually considering the issues at stake, which is a good start.

But contrary to the promise of the headline (which he probably didn’t write anyway), the measures that Senator Paul recommends would not get government “out of the marriage business altogether.” Judging by what he actually wrote, local government would still control entry and exit from civil marriage, and civil marriage itself would apparently still continue to exist. Many federal consequences, like Social Security survivorship and the ability to sponsor an immigrant spouse, would presumably continue to flow from marital status - and they’d still be unavailable in any other way.

This isn’t such a terrible thing, necessarily. Marriage policy is really, really complicated. As long as we have a government, and as long as it’s making important decisions about our families and property, at least some parts of civil marriage may actually be worth saving. Marriage can serve as a protection against the state, one that (among lots of other things) keeps families together and makes the Social Security system run marginally more justly: If anyone deserves to recoup some of what the government takes by way of the payroll tax, it's the widow of the worker who "contributed.” And if anyone is competent to sponsor a new citizen, it must be that new citizen’s spouse.

Meanwhile, leaving the entry conditions of marriage to the states would have been neither crazy nor unprecedented. It’s what has very often happened throughout our country’s history, and if the Supreme Court had gone that route, we'd likely have had ubiquitous gay marriage soon enough anyway. Historically speaking, states have commonly set very diverse requirements to enter into a marriage. These state-level requirements have included blood tests, waiting periods, and varying limits on consanguinity and age, to name just the big ones. (Also, notoriously, some states formerly set racial requirements, which I obviously deplore.)

Although the Supreme Court has repeatedly called marriage a fundamental right – including in Obergefell – the Court has also historically left the entry conditions of civil marriage to the states. It has intervened only seldom in this area. Interventions have included permitting interracial marriage, forbidding polygamy, allowing convicts to marry, and now permitting same-sex marriage, a decision I certainly approve of. If the state is to extend civil marriage, it ought to do so without respect to gender.

Not that I approve of everything that the civil aspect of marriage does. Far from it.

Contrary to what Senator Paul seems to claim, I am not aware that government has ever taxed marriage per se. The reality is a lot more complicated than that. There’s a marriage penalty to the income tax, but there’s also a marriage bonus. Which one you get depends on your income, your spouse’s income, and the distribution between them, as this baffling chart from the Tax Foundation shows. 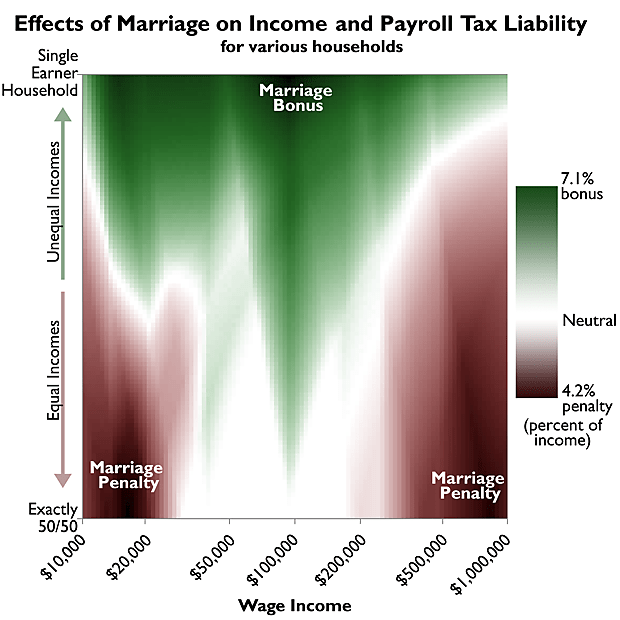 As if the perverse incentives of the above chart were not enough, there’s a deeper problem: The weird income tax effects of marriage can’t be eliminated until we either scrap the graduated income tax or cease to levy it on anything other than an individual basis. (Neither of those would be a bad idea, necessarily, though the latter would leave households of equal incomes taxed unequally if their income distributions were unequal. I’m not sure why we’d want to do that, but when you make the tax rates progressive, that’s what you’re stuck with. It's that or a marriage penalty and/or bonus. Mathematically, it just can’t be any other way.) Ultimately the tax effects of marriage are one of those areas where marriage policy would better off if we hit the reset button - on the tax system.

A good deal of the confusion about the meaning of marriage could also be remedied by admitting that there are in fact two kinds of marriage in the United States, private and civil. They usually happen at the same time, but they are quite distinct, legally. Private marriages can and should be recognized (or not) by individuals, churches, and families, freely and on a case-by-case basis. This is a matter of religious and associational liberty, and as such it should remain fully protected by the First Amendment. “Marriage” in this sense is not a government matter at all.

This private sort of marriage is a fundamental and negative right; it doesn't need the government's help to come into being. On this Rand Paul is absolutely correct, and I share his concern that churches and religiously observant businesses will be compelled to celebrate marriages that they find unconscionable. This they should not be forced to accept. (It hardly matters that these are scruples that have only lately appeared: Same-sex marriage itself has only lately appeared.)

The supporters of same-sex civil marriage, myself included, need to be magnanimous in victory, and we should now strive to protect those who are not inclined to celebrate our civil marriages in their private associations. We gays and lesbians in particular have felt the sting that can come from being in a politically powerless minority, and we ought not to inflict it on others.

So much for the private aspects of marriage, which are matters of natural (and negative) right. Civil marriage, meanwhile, is a civil right, like the right to vote, or the right to a trial by jury. Civil rights wouldn't exist in the state of nature, but in a governed state they can, and many of them clearly should. Our current implementation of civil marriage is tied up with welfare and tax policy in ways that libertarians correctly find troubling, as discussed above. But civil marriage also helps to clean up a lot of otherwise serious disputes in property and child custody law, and in matters of medical care and legal representation. Having marriage settles many questions and closes off many avenues by which the government might otherwise make itself troublesome.

All of this is to say that civil marriage is a bundle, and not all of it in my opinion is bad. Some of it can make our family lives more orderly and more predictable, more stable and actually less governed by judges and lawyers (and nosy relatives) – and more governed by ourselves, in exactly the ways that we see fit.

That’s a thing that libertarians perhaps should want after all: If the government ever got out of the marriage business, we might suddenly find it much more in all of our family lives.