Looking at Austerity in Spain

Spain is perhaps the weakest link in the Eurozone after Greece. Almost a quarter of its labor force is unemployed; its banking system is extremely vulnerable and it might collapse anytime; housing prices haven’t yet returned to normalcy after the burst of its real estate bubble; and the economy is in its second recession in two years and it’s expected to contract further in 2012 and maybe even in 2013. A bailout seems imminent and Tyler Cowen even warns of “an absolute and total crash” of the Spanish economy.


There is a wide consensus that Spain’s economic troubles are the result of an enormous housing bubble—even bigger than the one that hit the U.S.—that burst in 2008. Just the year before, Spain boasted healthy fiscal indicators: a general government budget surplus of 1.9% of GDP and a gross consolidated debt of just 36.2% of GDP. However, once the bubble burst, government revenues collapsed and stimulus spending was injected into the economy, resulting in a fiscal deficit of 11.2% in 2009 and a gross debt that has increased over 30 percentage points of GDP in just 4 years.


Paul Krugman and The Economist argue that this evidence shows that, unlike Greece, Spain wasn’t fiscally profligate. However, the devil is in the details. Spain did run budget surpluses prior to the crash, but those surpluses weren’t caused by restrained government spending, but by ballooning tax revenues (thanks to a growing housing bubble). If we look at total government spending in the last decade, we can see a steady and significant rise until 2009: 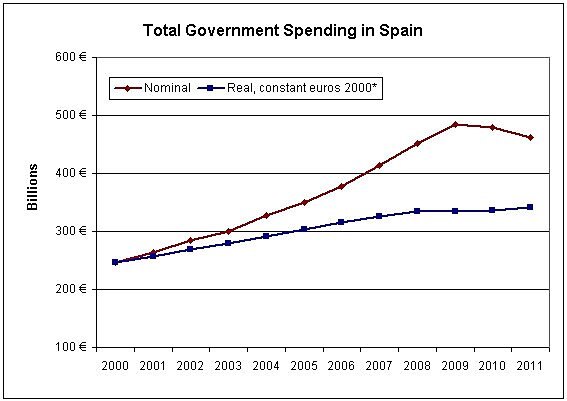 
Government spending in nominal terms increased at an annual rate of 7.6% from 2000 to 2009. Ryan Avent at The Economist says that “the push for austerity began in 2010,” and thus we have to look at nominal spending after that year, when according to Avent, it fell “substantially” due to austerity measures. In reality, it went down by just 1% in 2010 and a further 3.6% in 2011. If these cuts seem “substantial” to Avent, then a yearly average increase of 7.6% for almost a decade must be staggering.


Moreover, if we look at spending in real terms, using constant euros from 2000, there hasn’t been any decrease in the level of government spending.


Moreover, once the crisis kicked in, government spending as a share of GDP reached a peak at 46.3% in 2009 (due to a combination of still more stimulus spending and a contracting economy). It later fell to 43% in 2011, still a higher share than in 2008. Government spending in Spain has indeed come down in the last two years, but not in a dramatic fashion as some people would have us to believe.


What about taxes? As has been the case in Britain, France, Italy and Greece, in the last two years the Spanish government increased taxes to tackle the soaring deficit: personal income tax rates went up in 2010 and two new brackets of 44% and 45% were introduced for higher incomes. Tax credits to self‐​employed workers were revoked. The VAT rate went up from 16% to 18% and excise duties on tobacco and gasoline were also raised. All these tax increases took place before the large tax hike introduced this year by the conservative government of Mariano Rajoy, which turned Spain into one of the highest taxed countries in Europe (and explained at length in this Economic Development Bulletin).