Looking at Austerity in Italy

The Italian economy contracted for a third quarter in a row, deepening the country’s recession and adding to the fire of the euro crisis. Italy is the third largest economy in the Eurozone, and many view it as the endgame of an eventual collapse of the common currency because it is too big to fail. Neither the EU nor the IMF have enough cash to rescue it. If the country defaults, that would probably spell the end of the euro.


Austerity is being blamed for Italy’s economic troubles. Chiara Corsa, an economist at UniCredit, wrote that “The key factor is austerity, which is weighing heavily on consumption and investment.” Recent local elections saw the rise of anti‐​austerity parties. Paul Krugman warned about this back in December when he described the austerity push of Prime Minister Mario Monti as “self‐​defeating” and “delusional.”


However, as is the case for Britain, France and Greece, commentators are unclear about what austerity means for Italy, although many seem to imply spending cuts. For example, if Krugman’s criticism about Italian austerity is consistent with his critiques about austerity elsewhere in Europe, we know he means spending cuts. So let’s take a look and see if there has been any: 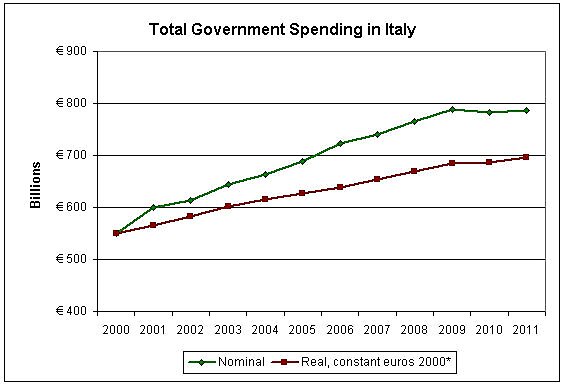 
So what’s austerity all about in Italy so far? According to The Financial Times, the “government’s €30 billion austerity package, passed in December, was heavily oriented towards tax increases rather than spending cuts, an emphasis that is now widely recognized by ministers as having driven Italy deeper into recession.” The FT adds that the Monti administration is facing “intense pressure from business, politicians and the public to shift the burden of austerity away from heavy taxation towards cuts in public spending.” As a result, the Italian Prime Minister announced €4.2 billion in spending cuts starting in June, still less than 1% of total public spending. That doesn’t sound savage to me.


But it’s quite fascinating to see the hysteria surrounding non existent spending cuts and its supposedly negative impact on economic growth. For example, last December The Economist warned:

“But too great an emphasis on austerity in the short run risks sending the continent’s economy into a deep recession; the latest data on Italian industrial production showed an annual fall of 4.1% in October, even before budget cuts were introduced by the new government.”

Interestingly, according to The Economist, spending cuts were somehow responsible for a decline in economic output in Italy even before being implemented!


If austerity is to blame for Italy’s recession, we need to be clear that by austerity we mean mostly tax increases with almost no reduction in government spending.