Looking at Austerity in Greece

Since 2009 Greece has been at the epicenter of the euro crisis, and after last week’s parliamentary election, it looks like its departure from the common currency is a matter of weeks. Everyone agrees that Greece didn’t get into trouble because it spent too little, just the opposite. When George Papandreou became prime minister in October 2009, he found that his conservative predecessor had cooked the books and left him with a staggering fiscal deficit of 12.7% of GDP. The socialist Papandreou was then forced to shelve his promises of more handouts and implement a program of fiscal austerity in exchange for multi‐​billion bailouts from the European Union.


Two and a half years on, things look as bleak as ever for Greece, with an economy that is still shrinking and unemployment on the rise. Today, many people claim that, even though profligacy was the source of Greece’s problems, austerity is now making things worse by cutting spending too fast too soon. Time magazine’s Fareed Zakaria explained the dynamics yesterday in his CNN show GPS:

“The problem is that as these governments cut spending in very depressed economies, it has caused growth to slow even further – you see government workers who have been fired tend to buy fewer goods and services, for example – and all this means falling tax receipts and thus even bigger deficits.”

Zakaria is not the only one describing austerity as mostly spending cuts, and some pundits even dramatize the term by adding adjectives such as “deep,” “brutal,” “savage,” or “self‐​defeating.” Let’s look at how brutal these spending cuts have been in Greece: 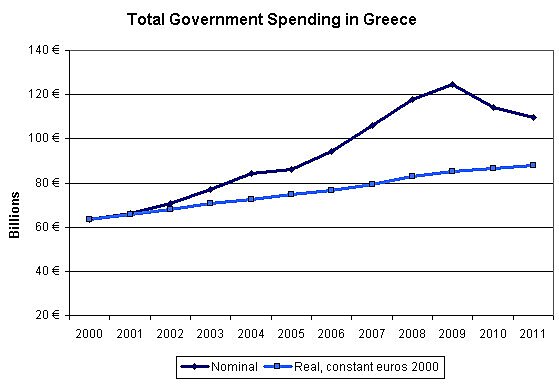 
Spending has declined to approximately its 2007 level in nominal terms, while in real terms it actually continues to go up. (I look at spending in real terms because that’s what Ryan Avent at The Economist said we should look at in a reply to Veronique de Rugy’s initial graph on austerity in Europe. Note that, as in my previous posts on Britain and France, I’m using the GDP deflator to calculate spending in real terms). If we look at spending in real terms, there haven’t been any spending cuts in Greece. On the other hand, Tyler Cowen observes that “in the short run it is supposedly nominal which matters (that said, gdp and population [and inflation] are not skyrocketing in these countries for the most part).” Let’s look at nominal then. Since 2000, public spending rose in Greece at an annual rate of 7.8% until 2009. Then it declined by 8.3% in 2010 and a further 4.1% in 2011. This is certainly a cut in spending, but far from brutal.


Some argue that we shouldn’t look at spending levels when talking about austerity, but rather at spending as a share of the economy. In that sense, government spending in Greece went up from 47.1% of GDP in 2000 to 53.8% in 2009 and it has come down to 50.3% in 2011—approximately its 2008 level. However, I don’t buy the argument. Does it mean that the government has to spend an ever increasing share of the GDP in order to keep the economy afloat? Is half of the economy not enough when it comes to government spending?


What about Zakaria’s argument of the crippling effect of firing government workers on growth? Last January, The Economist looked at the situation in Greece and noted that “Of the 470,000 who have lost their jobs since 2008, not one came from the public sector. The civil service has had a 13.5% pay cut and some reductions in benefits, but no net job losses.” As for what “austerity” means for most Greeks, the magazine added, “Since Greece’s first bail‐​out in May 2010, the government has imposed austerity, increasing taxes so much that people can barely manage.”


The Economist is not alone in pointing out the extent to which taxes have gone up. Even the IMF has done so. Back in November, Poul Thomsen, the IMF mission chief in Greece, said that the country “has relied too much on taxes and I think one of the things we have seen in 2011 is that we have reached the limit of what can be achieved through increasing taxes.” Since then Greece agreed to eliminate 15,000 government jobs (2% of its public sector workforce) in exchange for a second bailout. Once again, that figure pales when compared to the number of people who have lost their jobs in the private sector.


The evidence shows that in Greece austerity has meant significant tax increases and timid spending cuts.