Looking at ‘Austerity’ in Britain

I’m going to jump into the debate about austerity in Europe because it is being closely followed in Latin America, and many people are drawing the wrong conclusions about how austerity is strangling the European economies. But first, we have to be clear about what we mean by “austerity.”


As the debate between Veronique de Rugy of the Mercatus Center and Ryan Avent at The Economist shows, there are different definitions of austerity. The term could mean fiscal consolidation only by spending cuts. It could mean a mixture of spending cuts and tax increases (the so called “balanced approach”), and it could even be just tax increases. So when people blame “austerity” for Europe’s economic malaise, we could be talking about a very different set of policies in each country.


Let’s look at Britain, which just entered into a double dip recession because of, according to Paul Krugman, “the evident failure” of austerity policies. If we look at spending levels in the UK both in nominal and real terms, we can clearly see that despite the announcement of deep cuts, government spending continues to rise: 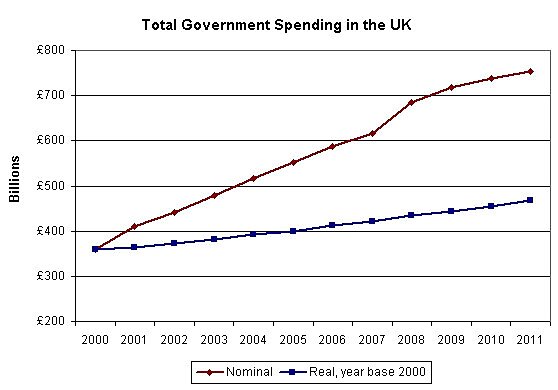 
It’s clear that, at least in nominal terms, the rate of growth of spending has declined, but that hardly constitutes brutal cuts as Krugman and others want us to believe. If we look at total government spending as a percentage of the economy, Britain reached a peak in 2009 at 51.5%, and that came down to 49.9% in 2011. Can anyone seriously argue that Britain is in a recession because of that tiny drop in spending as a share of the economy?


Now, let’s remember that the Conservative‐​Liberal Democrat coalition government that came to power in May 2010 adopted what The Economist hailed as a balanced approach of fiscal consolidation based on £1 of tax increases for £3 of spending cuts. To be fair, the British magazine also said that if economic recovery proved hard to achieve, the government should consider a reprieve in tax increases, but not on spending cuts. We all know that the tax increases already took place (the VAT rate went up from 17.5% to 20%, for example). But as we can see, spending cuts haven’t taken place at all. Thus, austerity in Britain consists only of tax increases.


It’s hard to estimate the impact of tax increases on the British economy. Certainly the economic turmoil in Continental Europe has played a role in taking the U.K. into a second recession. But those who claim that “austerity” is responsible for Britain’s economic malaise should be honest and acknowledge that by austerity they mean only tax increases, not spending cuts.