Interstate 35 between San Antonio and Austin is congested, so obviously (to some people, at least) the solution is to run passenger trains between the two cities. Existing tracks are crowded with freight trains, so the Lone Star Rail District proposes to build a brand-new line for the freight trains and run passenger trains on the existing tracks. The total capital cost would be about $3 billion, up from just $0.6 billion in 2004 (which probably didn't include the freight re-route). 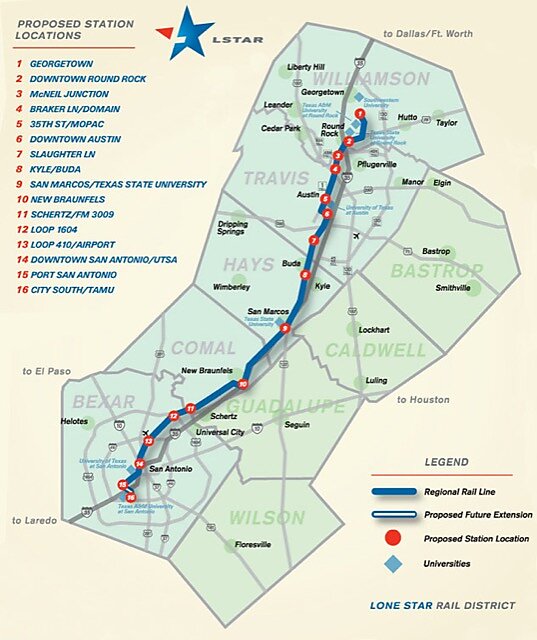 By coincidence, that was the projected capital cost for the proposed high-speed rail line between Tampa and Orlando (cancelled by Florida Governor Rick Scott), which are about the same 80-miles apart as Austin and San Antonio. But, despite the cost, Lone Star wouldn't be a high-speed rail line. According to a 2004 feasibility study, trains would take about 90 minutes between the two cities, with two stops in between. While express trains with no stops would be a bit faster, cars driving at Texas speeds could still be faster.

Lone Star is asking the San Antonio city council for $500,000 to help pay for an environmental impact statement and other studies. Austin has supposedly already agreed to fund its share, though it isn't in the city's budget.

If the goal is to relieve congestion on I-35, two new lanes would probably cost less than a billion dollars and would be capable of moving far more vehicles per day than Lone Star would take off the road. Of course, the highway is probably not congested over the entire route, so two new lanes for the full length probably aren't necessary. Besides, self-driving cars will probably go on sale and eliminate any need for passenger trains before the first Lone Star train would turn a wheel.

San Antonio Mayor Ivy Taylor, who famously cancelled the city's even more backwards streetcar project, says that Lone Star isn't one of her priorities. "There will be benefits from this alternative transit option, but we have to be good fiscal stewards," she added. Local taxpayers should hope that she and the San Antonio city council can resist the starry-eyed Lone Star plan.