The headline on the latest Washington Post-ABC News poll was “Poll Finds Americans Pessimistic, Want Change.” And why would they not, with a floundering war, civil liberties abuses, soaring federal spending, and the prospect of four years under the rule of Hillary or Rudy? But there are some signs in the accompanying data that seem to confirm the existence of libertarian voters, voters who don’t fit into either the liberal or conservative box.

The next question in the survey was “Do you think homosexual couples should or should not be allowed to form legally recognized civil unions, giving them the legal rights of married couples in areas such as health insurance, inheritance and pension coverage?” Respondents said they should, by 55 to 42 percent, up from earlier surveys. 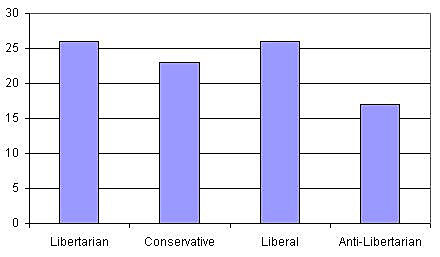 A few other reflections on these questions: It’s often been noted that how you ask the question can shape the answers. For instance, if you offer three positions, people will tend toward the middle option. Polls usually show that a majority of voters oppose gay marriage, while a slimmer majority now support legal recognition for domestic partnerships or civil unions. But if you give respondents three options–marriage, civil unions, or no legal recognition–the opposition is reduced, and polls tend to show a strong majority supporting some form of recognition. In the 2004 exit poll, for instance, the results were 25 percent for marriage, 35 percent for civil unions, and 37 percent opposed to both. 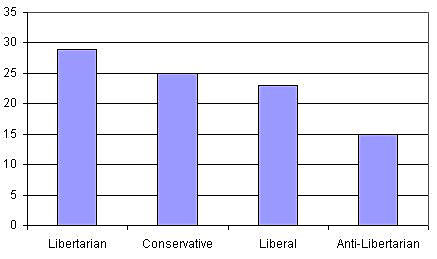 Yet more evidence that there is a libertarian vote that is indeed different from liberals and conservatives.