‘The Libertarian Vote’ — Now in an Ebook 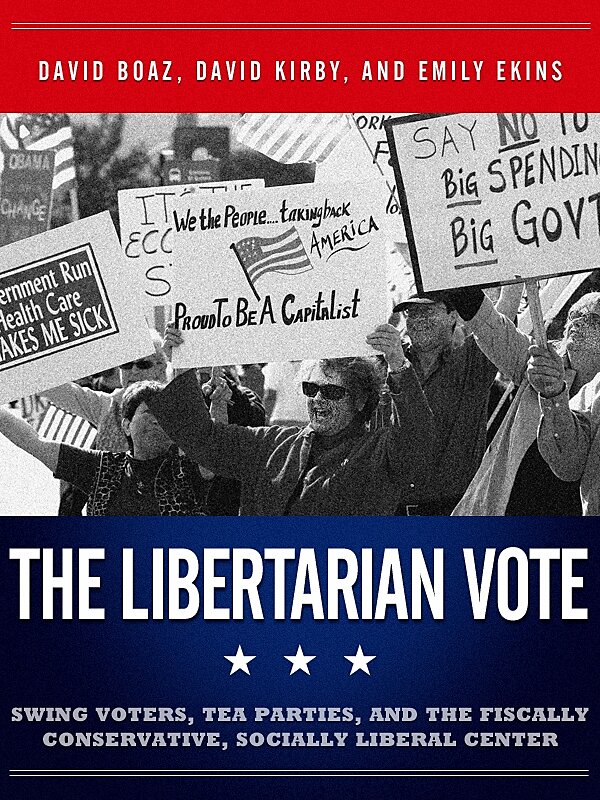 What a long way we’ve come since David Kirby and I first started writing about the libertarian vote in 2006. Back then liberal blogger Matt Yglesias neatly summarized the conventional political wisdom: the libertarian vote is “zero percent,” “a rounding error in the scheme of things.” Why would anyone care what libertarians think? And National Review’s Ramesh Ponnuru suggested that Republicans would actually lose votes by appealing to libertarians.


In our new ebook, The Libertarian Vote: Swing Voters, Tea Parties, and the Fiscally Conservative, Socially Liberal Center, Kirby, Emily Ekins, and I bring together our studies and other writings on libertarian voters, along with some spiffy new graphics. (That’s the Amazon link; for multiple formats, go here.)


Today, libertarians are an increasingly influential and accepted part of the political mix. Ron Paul went deep into the 2012 Republican presidential primary, drawing crowds of thousands of young people and 2.1 million votes; and his son Sen. Rand Paul is being joined by other libertarian‐​leaning members of both houses of Congress. Tea partiers have strong libertarian roots, as Kirby and Emily Ekins discuss in two articles in this ebook. The “Audit the Fed” bill passed the U.S. House 327 to 98; all but one Republican and 89 Democrats voted yes. In academia, social scientist Jonathan Haidt teamed up with scholars at UCLA, USC, and NYU to conduct the largest study ever on “libertarian psychology.” Nick Gillespie and Matt Welch write about a “libertarian moment” in their book Declaration of Independents.


The latest Governance Survey from Gallup, earlier visions of which are cited throughout the book, finds 25 percent of respondents gave libertarian responses to two questions (“government is trying to do too many things” and “government should promote traditional values”), up from 17 percent in 2004, 21 percent in 2006, and 23 percent in 2008 and 2010. Analysts from GOPAC to Nate Silver at the New York Times have tried to measure the libertarian – or “fiscally conservative, socially liberal” – constituency.


Read all about it in The Libertarian Vote.


Those who doubt the relevance of the libertarian vote might consult the last commentary in the book, “The Real Swing Voters,” which finds evidence in an August 2012 ABC‐​Washington Post poll that the truly independent voters still up for grabs lean strongly libertarian.