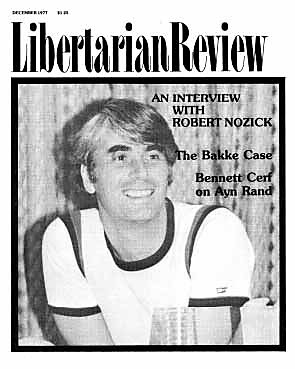 Many issues of the late, great libertarian magazine Libertarian Review are now available online. The magazine was published from 1972 to 1981, first as a newsletter of book reviews and then as a glossy monthly magazine edited by Roy A. Childs, Jr. It made quite a splash during those years, and Childs became one of the most visible and controversial libertarian intellectuals. After the magazine folded, as so many intellectual magazines do, he spent almost a decade as editorial director and chief book reviewer for Laissez Faire Books. He had read everything, and he knew everyone in the libertarian movement. He got lots of prominent people — including Murray Rothbard, John Hospers, Thomas Szasz, Roger Lea MacBride, and Charles Koch — to write for the magazine. And he discovered and nurtured plenty of younger writers.

As Tom G. Palmer put it in a letter published in The New Republic of August 3, 1992, just after Roy died, “Roy Childs was one of the finer members of a generation of radical thinkers who worked successfully to revive the tradition of classical liberalism — or libertarianism — after its long dormancy, and who dared to launch a frontal challenge to the twentieth‐​century welfare state. An autodidact who knew more about the subjects on which he wrote than most so‐​called ‘experts’, his writings exercised a powerful influence on a generation of young classical liberal thinkers.”