Our politicians, both right and left, have created a system for legal immigration that simply doesn't work. We have artificial quotas. We have "caps" on certain categories of workers that have no real relationship to the realities of the free market. It's no coincidence that recent history shows the only successful way to reduce illegal immigration is to have a recession. Over the past 10 years, both illegal entries and the number of undocumented immigrants in the country have declined. That's not because the government did anything right. ….

Try this, instead: No caps. No categories. No quotas. Just a straightforward background check, the proper paperwork to obtain a real Social Security number and work legally or prove legitimate family ties, and a reliable system to know who is coming and who is going.

Gov. Johnson is correct to reject government-mandated immigration quotas. As I argued in a recent blog post, quotas are the definition of an unreasonable immigration policy—they literally have no reason behind them. They are no different than Soviet manufacturing quotas, and they have the exact same effect: discord in the free market—surpluses where workers are unneeded, shortages where they are needed, and black markets that inevitably results when government makes movement illegal.

Figure: Apprehensions of Illegal Immigrants at the Border and Lesser-Skilled Guest Workers Admitted 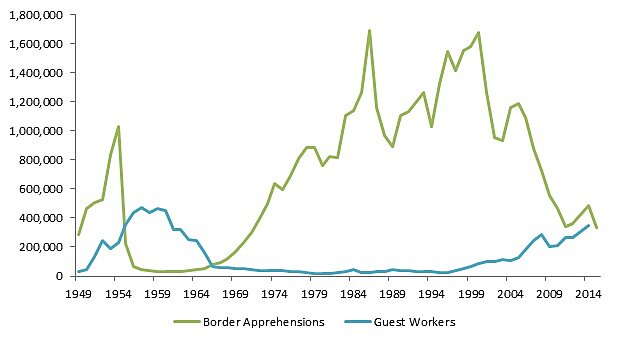 If the presidential candidate’s plan was implemented, the days of illegal immigration would be behind us for good.

While some people will call Gary Johnson’s proposal “open borders” without limits, this is not the case and not just because there would be background checks. There would be limits, but the limits would be those imposed not by bureaucrats, but by Americans as individuals. Rather than a single “immigration plan” for the country, Gov. Johnson is proposing giving Americans back their liberty to associate with foreigners as they see fit—plans of the many, not of the few. As the economist Friedrich Hayek once said:

This is not a dispute about whether planning is to be done or not. It is a dispute as to whether planning is to be done centrally, by one authority for the whole economic system, or is to be divided among many individuals. Planning in the specific sense in which the term is used in contemporary controversy necessarily means central planning—direction of the whole economic system according to one unified plan. Competition, on the other hand, means decentralized planning by many separate persons.

That is also the heart of the disagreement between those who favor an “immigration plan” along the lines of those outlined by the major party candidates and those who favor free markets in movement and employment.