A Libertarian Argument for Bernie Sanders?

Will Wilkinson notes that there is a libertarian argument for Bernie Sanders. I'm not sure I buy the precise point Wilkinson is making. Sanders says he wants to make the United States more like Finland, Sweden, and Denmark. And those countries do indeed rank higher than the United States in the Cato Institute's Human Freedom Index, compiled by my colleagues Ian Vásquez and Tanja Porčnik. But Sanders wants to emulate those countries in the ways they are less free than the United States (i.e., expanding government transfers), not in the ways they are more free (taxes and regulation). I think this powerful Sanders ad featuring Eric Garner's daughter Erica is a much better libertarian argument for Sanders.

Sanders' record here isn't exactly clean. The police confronted Eric Garner because they believed he was selling untaxed cigarettes. If Sanders indeed penned the below letter in 1972 (I have been unable to verify its authenticity, but it sounds like him), then he is well aware cigarette taxes disproportionately burden the poor. 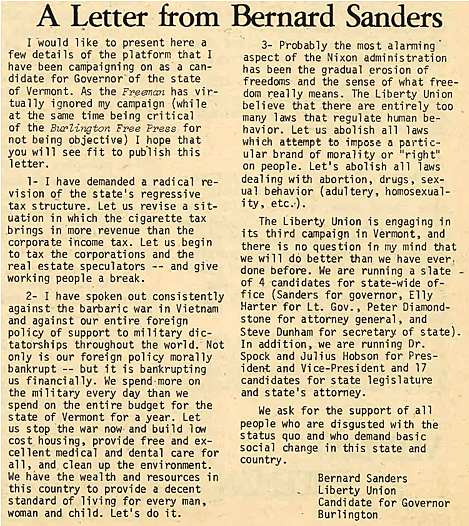 If that letter is authentic, it provides other libertarian arguments for Sanders. His health care plan is not one.

.@BernieSanders pretends #MedicareForAll would reduce HC spending. In fact, it would give us Defense Dept-level waste. #CatoSOTU

>@BernieSanders wants everyone in a #Medicare program that wastes 1 in 3 dollars spent? A better idea: http://t.co/0eGnO3Q0js. #Cato2016

What's silly about the @HillaryClinton/@BernieSanders #MedicareForAll tiff is that #ObamaCare will give us single payer in 10yrs regardless.

Many who can't get mental health care are on a @VeteransHealth waiting list, @BernieSanders. Solution: http://t.co/kSKwSqtudF. #Cato2016

As chair of the Sen. Veterans Committe, @BernieSanders perpetuated a @VeteransHealth system that encourages war. http://t.co/kSKwSqtudF.