It’s rather sad that the nation’s leading liberal editorial page dedicates an editorial to Defense Secretary Robert Gates’ milquetoast call for less‐​huge defense spending, but can only muster dissembling and throat‐​clearing. 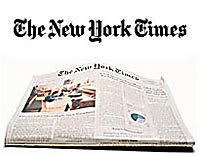 The Times mentions the “feeding frenzy at the Pentagon budget trough” since 9/11. It notes that defense spending has roughly doubled in the last decade. It admits that the recent QDR “failed to start making the hard choices” about defense spending.


But there’s almost nothing of substance in the Times editorial about what the United States should be doing to its military budget. Nonsensically, it argues that as the U.S. gets out of Iraq and Afghanistan, “Washington will have to consider trimming troop strength, beginning with the Navy and the Air Force.” But why wait? The Navy and Air Force have played almost no role in the wars in those two countries. If the Navy and Air Force should be undergoing personnel cuts, Iraq and Afghanistan provide no reason to hold off, and arguably provide reason to hurry up in order to free up scarce resources in order to “win the wars we’re in,” as Gates is fond of saying.


Conservative editorial pages bang away on their war/​military spending/​nationalism drum all the time, helping to embed militarism in conservative identity. Liberals need cues here, too: is it okay for liberals to be advocating cuts in defense spending? Not only is it okay, but should they do so? The Times had an opportunity to give its views on these questions in this editorial, and it shrugged.