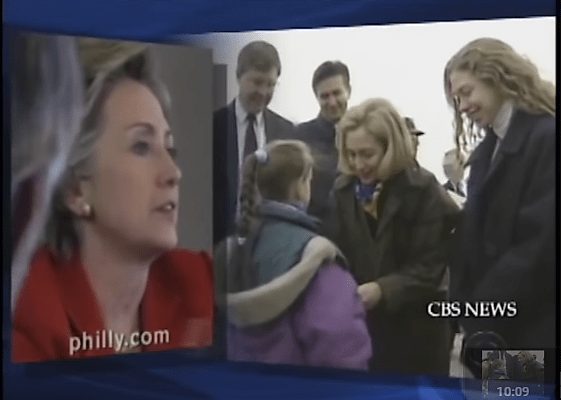 Earlier this week Ruth Marcus of the Washington Post published a column titled (in the print edition) “Stonewaller, shape‐​shifter, liar.” I won’t keep you in suspense: it was about Donald Trump. But apparently I wasn’t the only reader to have the reaction, Wouldn’t that title apply to more than one candidate this year? And some of the readers made their view known to Marcus. So today she tries valiantly to explain why Hillary Clinton isn’t — really, quite, so much — guilty of the same offenses.


Sure, she stonewalls and keeps secrets. But in many cases, she eventually comes clean. Like, you know, with her private‐​server emails and her Benghazi correspondence.


And yes, she’s flipped 100 percent from her previously firm positions on same‐​sex marriage (against, then for) and the Pacific region free‐​trade agreement (for, then against). Yet, Marcus writes, “voters, agree or disagree, can have reasonable confidence about Clinton’s basic worldview and where she stands on issues.” Really? Just where does she stand on trade? For TPP or against it? For a trade agreement with Europe or against it? Unless Marcus is psychic, she’d surely have to admit that Clinton stands firmly with her finger to the wind. (Admittedly, that might be better than Trump’s adamant support for protectionism.)


And then there’s, well, the lying. Marcus cites two fact‐​checkers who conclude that there isn’t sufficient evidence to prove that Clinton lied about the Benghazi attack. Not beyond a reasonable doubt, anyway. Marcus even praises Clinton’s wildly inaccurate and repeated statements about coming under sniper fire:

Clinton’s handling of another “lie” is instructive. At several points during the 2008 campaign, Clinton described “landing under sniper fire” in Bosnia in 1996; video debunked that account. But confronted with conflicting evidence, Clinton acknowledged that she “misspoke.” Has Trump ever backed down from his bevy of demonstrably false statements?

Sorry, counselor, this is not “misspeaking.” It would be misspeaking if she said she came under fire in 1998, when it was really 1996. We might even credit her with misspeaking if she said it happened in Bosnia when it really happened in Kabul; she’s traveled a lot. But in this case, she made a claim about her own experience, and repeated it many times over several years with great detail (as a video with 7 million views illustrates), that was completely at odds with the facts. It’s not a stumble. It’s more like the false claim of Joe Biden that he came from a long line of coal miners, or the false claim of Sen. Richard Blumenthal throughout his political career that he served in Vietnam, or indeed the false claim of historian Joseph Ellis that he too served in Vietnam. In every case these claims served to make the teller seem more experienced and even heroic than he or she actually was — helpful in building a political persona, but absolutely false.


And that doesn’t even get us to statements at odds with known facts on such points as whether she was “dead broke” upon leaving the White House, why she was named Hillary, whether her grandparents were immigrants, and whether she tried to enroll in the Marines or how and why she voted for the war in Iraq.


My low regard for Donald Trump is pretty well known. But I don’t see how any honest assessment can dismiss the low levels of honesty that Hillary (and Bill) Clinton have displayed for 25 years now. Which might explain why exactly 64 percent of voters consider both Clinton and Trump not to be “honest and trustworthy.” And given the high levels of unpopularity of both major‐​party nominees, you have to wonder if voters are going to be looking around for plausible alternative candidates.