When I first read this story in the Washington Post about supposedly under-appreciated federal bureaucrats, I was tempted to focus on the sentence referring to “the sledgehammer of budget cuts scheduled to hit today.” Below is the Congressional Budget Office's depiction of this "sledgehammer." Does the Washington Post really think that a 1.2 percent reduction in overall spending for the current fiscal year (which means the federal budget would still be larger than it was last year) represents a “sledgehammer of budget cuts”? 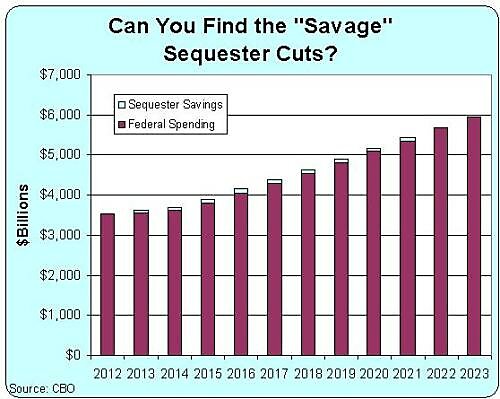 But I just mocked the New York Times last week for its reporting about supposed “deep spending cuts” and I also nailed the Washington Post back in 2011 for using the term “slash” for a budget plan that would have shaved a miniscule $6 billion from a budget of $3,800 billion. So instead I want to focus on the part of the story featuring self-pitying remarks of federal bureaucrats.

[F]ederal workers in [the government-employee-heavy Fairfax County neighborhood of] Mantua say … having “United States Treasury” atop their paycheck [now] means having to defend yourself against arguments, from strangers and even from your own relatives, that you’re an overpaid and underworked leech.

…[M]any federal workers are … bothered by the growing sense that the careers they chose may now seem unattractive, even unworthy. …[O]n a recent visit to Missouri, [one worker] got fed up with ritual denunciations of federal workers…

[Another worker named Raymond] Won, a federal worker for 31 years, resents the notion, now commonplace on talk radio and Web sites devoted to bashing the government, that federal workers carry a lighter load than their for-profit counterparts.

…[O]lder government workers … are concerned about their pensions but even more anxious about why politicians are so willing to make federal employees the target of popular rage.

Excuse me while I wipe away the tears and compose myself. There are so many stories of unbearable hardship:

Perhaps we can create a new congressional medal to give to the bureaucrat who suffers the most because of the “sledgehammer” cuts and those mean people on “web sites.”

Indeed, I think we have our first recipient. But brace yourself before you read this passage---the anguish and suffering may haunt you for the rest of your life. This bureaucrat, who is enduring unimaginable hardship

has already cut back in anticipation of the forthcoming budget slashing: He told a carpenter who was going to build bookshelves in the living room that the $5,000 job will have to be put off, and he told his doggie day care provider that he’ll have to go without that service when the furloughs kick in.

Oh my God! Not only are we failing to appreciate government bureaucrats, but the “budget slashing” will lead to neglected pets as well. What sort of cruel and heartless society have we become?!?

And imagine the Keynesian death spiral that will occur when the carpenter and dog walker then have to cut back on their purchases? Maybe we need to take Bastiat’s advice and go break some windows!

To make matters worse, there are mean-spirited people such as Chris Edwards at places like the Cato Institute who have the nerve to point out that federal bureaucrats get about twice the overall level of compensation as workers in the productive sector of the economy. 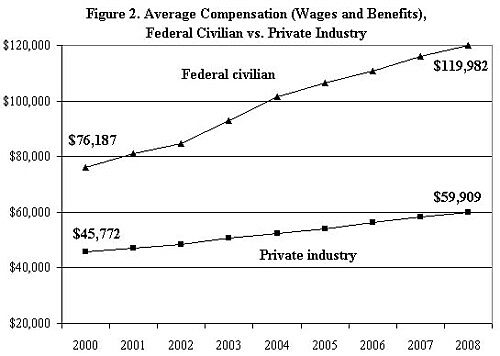 How can Edwards sleep at night after making such an invidious comparison?

But there’s another cad at the Cato Institute who actually had the nerve to narrate the video below, which unfairly uses facts and data to show that the federal workforce is over-compensated. Worst of all, he actually suggests at the end of the video that the real problem is that the federal government is far too large. What sort of place would employ such unreasonable folks?