Lessons from the New Transit Data

The American Public Transportation Association (APTA) argues that a 0.7 percent increase in annual transit ridership in 2013 is proof that Americans want more “investments” in transit–by which the group means more federal funding. However, a close look at the actual data reveals something entirely different. 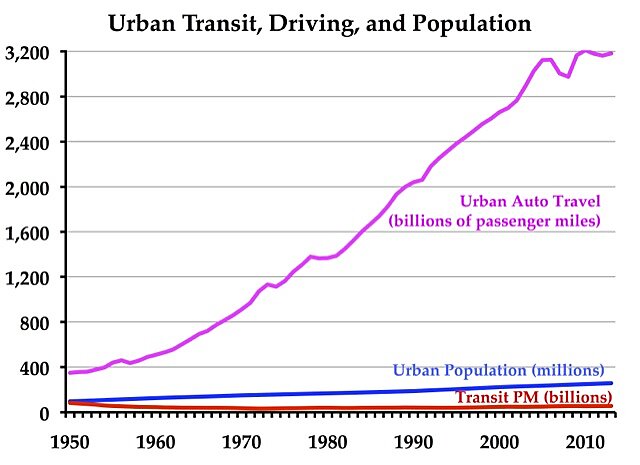 APTA wants people to believe that transit is an increasingly important form of transportation. In fact, it is increasingly irrelevant. Although urban driving experienced a downward blip after the 2008 crash, it is now rising again, while transit outside of New York City is declining. Source: Urban driving data from Federal Highway Administration, urban population from the Census Bureau, and transit numbers from APTA. Transit PM = transit passenger miles.[/caption]


Rail and bus ridership have grown in Seattle and a few other cities, but the point is that construction of expensive transit projects with federal funds is not guaranteed to boost transit ridership. In many cases, overall transit ridership declines because the high costs of running the rail systems forces transit agencies to cut bus service.


APTA wants more federal funding because many of its associate members are rail contractors who depend on federal grants to build obsolete transit systems. Light‐​rail lines being planned or built today cost an average of more than $100 million per mile, while some cities have built new four‐​lane freeways for $10 million to $20 million per mile, and each of those freeway lanes will move far more people per day than a light‐​rail line.


Congress will be reconsidering federal funding for highways and transit this year, and APTA wants as much money as possible diverted to transit. President Obama has proposed a 250 percent increase in deficit spending on transportation, most of which would go to transit.


Transit only carries about 1 percent of urban travel, yet it already receives more than 20 percent of federal surface transportation dollars. Since most of those federal dollars come out of gas taxes, auto drivers are being forced to subsidize rail contractors, often to the detriment of low‐​income transit riders whose bus services are cut in order to pay for rail lines into high‐​income neighborhoods.


The real problem with our transportation system is not a shortage of funds, but too much money being spent in the wrong places. New York City transit was the only major transit system in the country that covered more than half its operating costs out of fares in 2012; the average elsewhere was less than 30 percent. Funding transportation out of user fees, such as mileage‐​based user fees and transit fares, would give transportation agencies incentives to spend the money where it is needed by transport users, not where it will create the most pork for politicians.