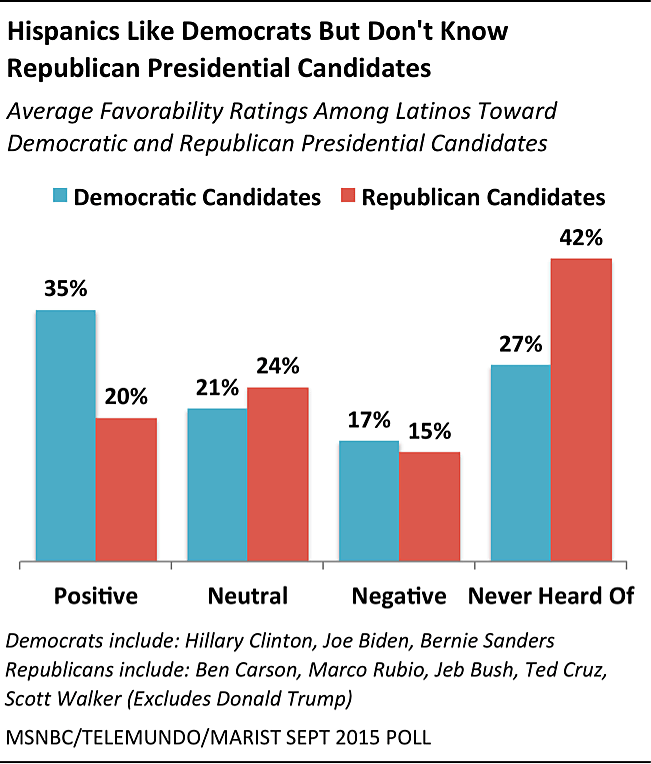 revealed that President Obama garnered 71% of the Hispanic vote, while his Republican rival Mitt Romney captured a mere 27%. In 2008, Republican John McCain didn’t do much better, capturing only 31% of the Latino vote to Obama’s 67%. In sum, Latinos have demonstrated a strong affinity towards the Democrats. Is that because they hate Republicans? The data suggests no.

A recent MSNBC/Telemundo/Marist poll finds that while Latinos are more favorable towards Democratic presidential candidates they are not antagonistic towards Republican candidates either, they just don’t know them—except for Trump.

This data indicate that Latinos don’t hate Republicans. Instead, Republicans haven’t shown up in community venues or in news mediums to garner greater exposure in Hispanic communities as much as Democrats. When Republicans do make headlines in Hispanic communities, it's typically for bombastic proposals like Trump’s plan to forcibly deport 11 million unauthorized immigrants, necessarily breaking apart families and loved ones.

Perhaps surprisingly, Latinos' negative attitudes toward Trump do not spill over toward the other GOP candidates. This means GOP candidates can stake out different positions on immigration and potentially win over a fast-growing demographic in the country.


Trump the Exception Not the Rule?

Donald Trump is the one Republican that Hispanics have disproportionately heard about—and what they've heard is not good. While Republican candidates on average received negative marks from only 15% of Hispanics, Trump got a 70% negative rating.  Trump has made a number of provocative and controversial statements on the campaign trail, and his positions on immigration are likely behind his inability to connect with Latinos.

A recent Washington Post/ABC news survey model found that immigration attitudes are the strongest statistical predictor of Trump support. Trump is not a limited government conservative, and neither are many of his supporters. But rather his controversial immigration positions are key to his support, and negatively define him among Hispanics as well.