Krugtron the Invincible…or Krugman the Inadvertent Opponent of Tax Increases?

President Bush imposed a so-called stimulus plan in 2008 and President Obama imposed an even bigger "stimulus" in 2009. Based upon the economy's performance over the past five-plus years, those plans didn't work.

Japan has spent the past 20-plus years imposing one Keynesian scheme after another, and the net effect is economic stagnation and record debt.

Going back further in time, Presidents Hoover and Roosevelt dramatically increased the burden of government spending, mostly financed with borrowing, and a recession became a Great Depression.

That's not exactly a successful track record, but Paul Krugman thinks the evidence is on his side and that it's time to declare victory for Keynesian economics.

Those of us who have spent years arguing against premature fiscal austerity have just had a good two weeks. Academic studies that supposedly justified austerity have lost credibility; hard-liners in the European Commission and elsewhere have softened their rhetoric. The tone of the conversation has definitely changed.

But Krugman doesn't just want to declare victory. He also spikes the football and does a dance in the end zone.

I’m always right while the people who disagree with me are always wrong. And not just wrong, they’re often knaves or fools. ...look at the results: again and again, people on the opposite side prove to have used bad logic, bad data, the wrong historical analogies, or all of the above. I’m Krugtron the Invincible!

So why does Krugman feel so confident about his position, notwithstanding the evidence? Veronique de Rugy has a concise and fair assessment of the Keynesian rationale. Simply stated, no matter how bad the results, the Keynesians think the economy would have been in even worse shape in the absence of supposed stimulus.

Veronique, by the way, points out why this argument is utterly unpersuasive by using the same logic to declare victory for markets.

But I think the best part of Veronique's article is the section explaining that not all austerity is created equal. Simply stated, why expect better economic performance if "austerity" means that taxes go up and the burden of government spending stays the same?

Here's some of what Veronique wrote on this issue.

...austerity, as defined by economists, represents the measures implemented by a government in order to reduce the debt-to-GDP ratio. Unlike Keynesians, I do not think that debt is good for economic growth, but I would prefer the word “austerity” to describe the measures implemented to shrink the size and scope of government... In other words, the important question about austerity has less to do with the size of the austerity package than what type of austerity measures are implemented. ...when governments try to reduce the debt by raising taxes, it is likely to result in deep and pronounced recessions, possibly making the fiscal adjustment counterproductive. ...austerity measures implemented in Europe are not the kind of austerity we actually need. In fact, the data shows that it has mostly consisted in raising taxes.

Since I've repeatedly made these same points, you can understand why I'm a big fan of her analysis.

Moreover, I think this gives us some insight into why Krugman may actually think he has prevailed. Simply stated, he's comparing Keynesianism to the IMF/European version of austerity. 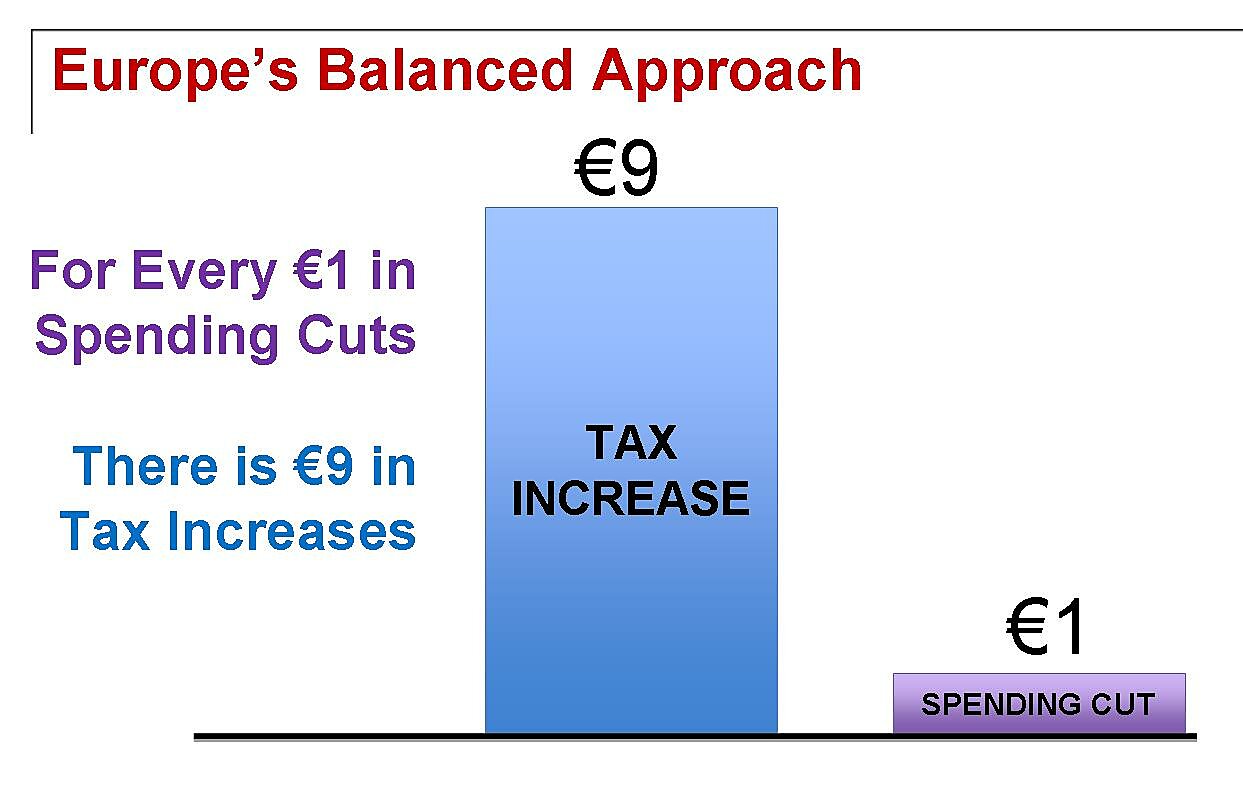 But that type of "austerity" - as you can see from one of Veronique's charts - is overwhelmingly comprised of tax hikes.

Yet is anybody surprised that we haven't seen much - if any - growth in tax-happy nations such as Greece, Portugal, Italy, Ireland, Spain, and the United Kingdom?

Sadly, we only have a few examples of this smaller-government approach. But we get very positive results.

The burden of government spending was reduced during the Reagan years and Clinton years, for instance, and the economy enjoyed good growth in both periods.

Canada was even more aggressive about reducing the size of the state during the 1990s. Their economy also did quite well, notwithstanding Keynesian dogma.

I suspect Keynesians would respond to these examples by asserting it's okay - at least in theory - to restrain spending if the economy isn't in recession.* 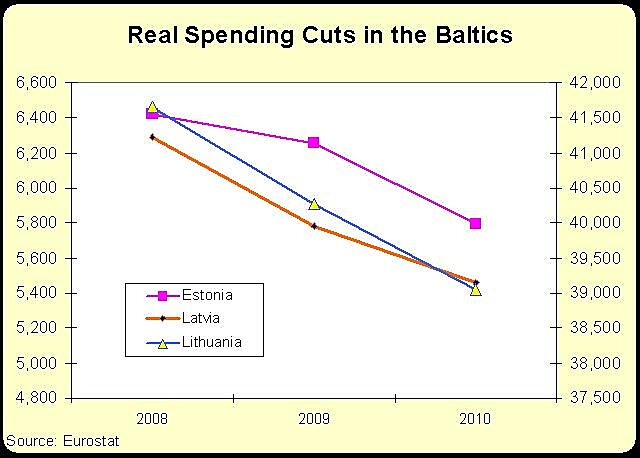 But then how do they respond to the experience of the Baltic nations? When the financial crisis hit a few years ago, those governments imposed genuine spending cuts and largely avoided the big tax hikes that have plagued other European nations.

Now Estonia, Lithuania, and Latvia are enjoying impressive growth while the nations that raised taxes seem stuck in perpetual recession.**

So let's recap. When nations try Keynesianism, they get bad results because more government spending isn't conducive to growth.

When nations raise taxes, they get bad results because you don't get more growth by penalizing work, saving, investment, and entrepreneurship.

But when nations reduce the burden of government spending and leave more resources in the productive sector, the economy recovers.

Seems like one side can declare victory and spike the football, but it's not Paul Krugman and the Keynesians.

*I'm guessing one would be hard pressed to find any examples of modern-day Keynesians ever supporting fiscal restraint.

**Krugman tried to undermine the Baltic model of fiscal restraint by attacking Estonia, but wound up with egg on his face.