Kerry and Lieberman Unveil Their Climate Bill: Such a Deal!

I see that my colleague Sallie James has already blogged on the inherent protectionism in the Senate’s long-awaited cap-and-tax bill.  A summary was leaked last night by The Hill.

Well, we now have the real “discussion draft” of  “The American Power Act” [APA], sponsored by John Kerry (D-NH) and Joe Lieberman (I-CT).  Lindsay Graham (R-SC) used to be on the earlier drafts, but excused himself to have a temper tantrum.

So, while Sallie talked about the trade aspects of the bill, I’d like to blather about the mechanics, costs, and climate effects. If you don’t want to read the excruciating details, stop here and note that it mandates the impossible, will not produce any meaningful reduction of planetary warming, and it will subsidize just about every form of power that is too inefficient to compete today.

APA reduces emissions to the same levels that were in the Waxman-Markey bill passed by the House last June 26.  Remember that one -- snuck through on a Friday evening, just so no one would notice?  Well, people did, and it, not health care, started the angry townhall meetings last summer.  No accident, either, that Obama’s approval ratings immediately tanked.

Just like Waxman-Markey, APA will allow the average American the carbon dioxide emissions of the average citizen back in 1867, a mere 39 years from today.  Just like Waxman-Markey, the sponsors have absolutely no idea how to accomplish this.  Instead they wave magic wands for noncompetitive technologies like “Carbon Capture and Sequestration” (“CCS”, aka “clean coal”), solar energy and windmills, and ethanol (“renewable energy”), among many others.

Just like Waxman-Markey, no one knows the (enormous) cost.  How do you put a price on something that doesn’t exist?  We simply don’t know how to reduce emissions by 83%.  Consequently, APA is yet another scheme to make carbon-based energy so expensive that you won’t use it.

This will be popular!  At $4.00 a gallon, Americans reduced their consumption of gasoline by a whopping 4%.  Go figure out how high it has to get to drop by 83%.

Oh, I know. Plug-in hybrid cars will replace gasoline powered ones. Did I mention that the government-produced Chevrolet Volt is, at first, only going to be sold to governments and where it is warm because even the Obama Administration fears that the car will not be very popular where most of us live.  Did I mention that the electric power that charges the battery most likely comes from the combustion of a carbon-based fuel? Getting to that 83% requires getting rid of carbon emissions from power production.  Period.  In 39 years. Got a replacement handy?

Don’t trot out natural gas.  It burns to carbon dioxide and water, just like coal.  True, it’s about 55% of the carbon dioxide that comes from coal per unit energy, but we’ll also use a lot more more electricity over the next forty years.  In other words, switching to natural gas will keep adding emissions to the atmosphere.

Anyway, just for fun, I plugged the APA emissions reduction schedule into the Model for the Assessment of Greenhouse-gas Induced Climate Change (MAGICC -- I am not making this up), which is what the United Nations uses to estimate the climatic effects of various greenhouse-gas scenarios.

I’ve included two charts with three scenarios. One is for 2050 and the other for 2100.  They assume that the “sensitivity” of temperature to a doubling of atmospheric carbon dioxide is 2.5°C, a number that many scientists think is too high, given the pokey greenhouse-effect warming of the planet that has occurred as we have effectively gone half way to a doubling already. The charts show prospective warming given by MAGICC.

The first scenario is “business-as-usual”, the perhaps too-optimistic way of saying a nation without APA.  The second assumes that only the US does APA, and the third assumes that each and every nation that has “obligations” under the UN’s Kyoto Protocol on global warming does the same. 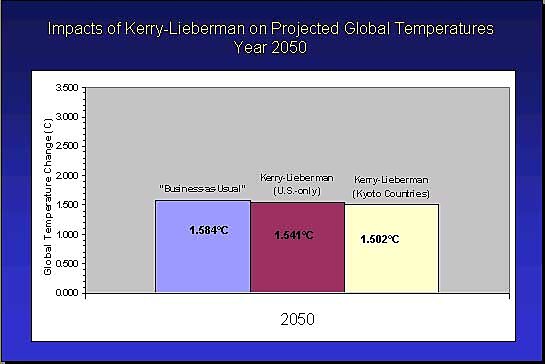 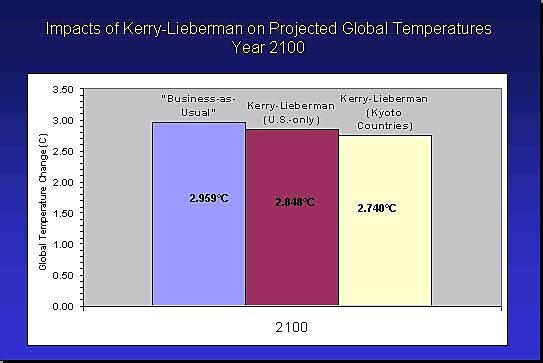 As you can plainly see,  APA does nothing, even if all the Kyoto-signatories meet its impossible mandates.  The amount of warming “saved” by 2100 is 7% of the total for Business-as-Usual, or two-tenths of a degree Celsius. That amount will be barely detectable above the year-to-year normal fluctuations.  Put another way, if we believe in MAGICC, APA -- if adopted by us, Europe, Canada, and the rest of the Kyotos -- will reduce the prospective temperature in 2100 to what it would be in 2093.

That’s a big if.  Of course, we could go it alone. In that case, the temperature reduction would in fact be too small to measure reliably.

I’m hoping these numbers surface in the “debate” over APA.

So there you have it, the new American Power Act, a bill that doesn’t know how to achieve its mandates, has a completely unknown but astronomical cost, and doesn’t do a darned thing about global warming.  Such a deal!