According to The Hill, in a conference call yesterday with the nation’s governors, Vice President Joe Biden said that “In my wildest dreams, I never thought it would work this well.” The “it” would be the administration’s $787 billion so‐​called “stimulus” package.

Nearly $10 billion in stimulus aid to repair the nation’s tattered highways has largely bypassed dozens of metropolitan areas where roads are in the worst shape, a USA TODAY analysis shows… The problem is a byproduct of a stimulus package designed to spend as fast as possible to revive the economy. Many roads are in such bad shape that repairs would take too long and cost too much to qualify for funds, says John Barton, head of engineering for Texas’ Department of Transportation. The result is that counties with the worst roads won’t get much more repair money than counties with better roads. The 74 counties with half of the nation’s bad roads will split $1.9 billion, records show; counties with no major roads in bad shape will split about $1.5 billion.

A few weeks ago I was driving on I-70 somewhere around Washington, PA 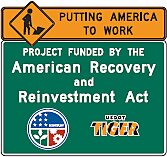 and got stuck in a traffic jam over what appeared to be a small bridge maintenance job. A sign, also funded by taxpayers, proudly declared that the maintenance was made possible by the “stimulus” legislation. What irritated me more than the traffic jam was the fact that the stretch of I-70 I was on is a notoriously white‐​knuckle ride. The pavement is old and the two lanes are squished between cement dividers, leaving little room for error. A reasonable person might conclude that fixing I-70 would be a priority. But reasonable and Congress go together like wolves and sheep. To me it was further evidence of the inefficient, politicized nature of federal infrastructure spending. (It also brought to mind former pork‐​barrel congressman Bud Shuster’s lightly traveled I-99 in central PA.)

The $787 billion economic recovery package also is stimulating growth in the federal government as agencies hire thousands of workers and spend millions of dollars to oversee and implement the package, according to government records and spokesmen… That’s helped fuel the continued growth of the federal government, which increased by more than 25,000 employees, or 1.3%, since December 2008, according to the latest quarterly report. During that time, the ranks of the nation’s unemployed increased by nearly 4 million, Labor Department statistics show.