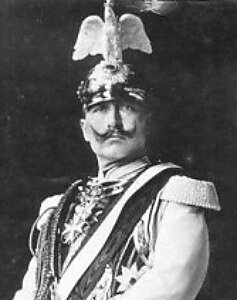 Just when you thought you’d seen everything, ol’ Kaiser Bill emerges from the Beyond to castigate the U.S. president:


You’ve named 18 so far, according to something I read in Foreign Policy. That includes a border czar, a climate czar, an information technology czar and — I don’t think Thomas Jefferson grew enough hemp in his lifetime to dream up this one — the “faith‐​based czar.” Your car czar, Steve Rattner, was in the news last week, trying to keep Chrysler out of bankruptcy.


It took Russia 281 years to accumulate that many czars. Even with hemophilia, repeated assassinations and a level of inbreeding that would gag a Dalmatian breeder. You did it in less than 100 days.


And every one of them hurts. I think I speak for all passed‐​over Victorian despots when I say that.


…maybe it’s time for a new autocrat to get some air time. Time for something that will stand out even in a White House with a czar in every cubicle.


In Detroit, the president’s car sultan … Instant respect. Mainly because those who defy the car sultan might be killed by eunuch assassins.


Or might I humbly suggest the title of an enlightened ruler who — unlike the czars — actually worked well with parliament and the nobility (in your terms, that would be “Congress” and “Oprah”). Somebody whose record is nearly unblemished, except for one invasion of Belgium that everybody’s totally over now.


Yours in friendship, Wilhelm II