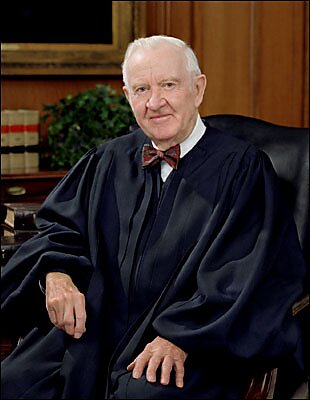 John Paul Stevens, the oldest-ever and (by the end of the term) second-longest-serving Supreme Court justice, has had a long career that, judging by his fitness regimen—the envy of men much younger than he—could have continued for many years yet.  Justice Stevens is to be commended for his record of service in a variety of positions in the public and private sector.

Unfortunately, the jurisprudential legacy he leaves behind is much more checkered than his personal integrity and professionalism: Justice Stevens “grew” from his country-club Republican roots to becoming the Court’s liberal lion.  While a friend of liberty in certain limited circumstances, he ultimately hangs his hat on supporting government action over the rights of individuals in contexts ranging from property rights (Kelo v. New London) to the Second Amendment (D.C. v. Heller) to free speech (Citizens United and Texas v. Johnson, the flag-burning case) to executive agency power (Chevron).  And even on those issues where friends of liberty can disagree in good faith as a matter of policy, such as abortion and the death penalty, Stevens admittedly and unabashedly asserted his own policy preferences instead of following the law.

Each of the candidates on the “short list” to replace Stevens—most notably Elana Kagan, Diane Wood, and Merrick Garland—has pluses and minuses in terms of their approach to the law (not to mention politically).  But in any case this summer’s confirmation hearings will again show the American people the different approaches to the judicial role.  At a time when the constitutional interpretation looms large in an electoral context—not least with the growing discomfort over the massive new health reform—voters will be able to see the dangerous consequences of following the errant jurisprudential path that Justice Stevens blazed so honorably.