Yesterday, Democrats for Public Education (DFPE) released the results of a poll that supposedly shows a high degree of public support for their agenda:

What an amazing coincidence! The public favors exactly what DFPE proposes!

But let's look at how they phrased the "proposed reforms": 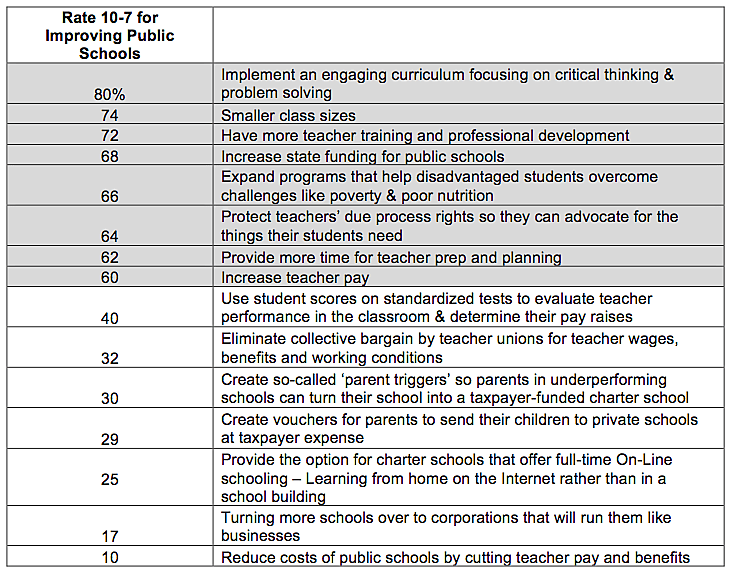 Notice how all the so-called "progressive reforms" sound positive ("engaging curriculum" "overcome challenges") and sometimes even explicitly connect the reform to some positive outcome ("help disadvantaged students"). Are teachers' "due process rights" (read: tenure) really about their ability to "advocate for the things that students need" or more about protecting incompetent teachers from being fired?

And of course voters favor increased spending and higher teacher pay in the abstract. That's consistent with the more credible polling from Education Next, but leaves out the key fact that Americans vastly underestimate how much we now spend on schools. As the EdNext polling shows, public support for increasing spending and teacher salaries drops precipitously when informed of how much is currently being spent. 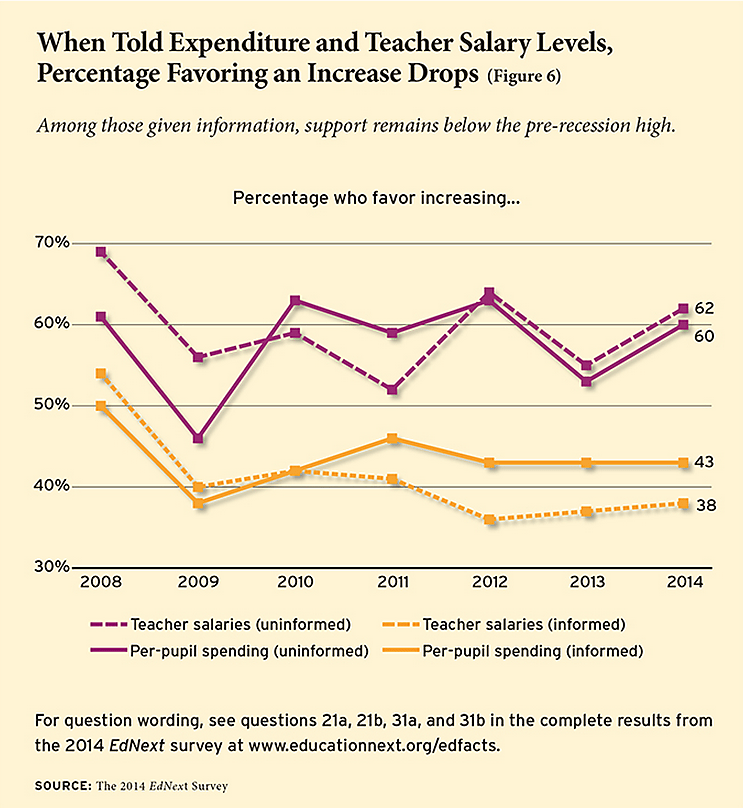 Likewise, the public supports "smaller class sizes" in the abstract, but in the real world there are tradeoffs and limited resources. The research on reducing class size is mixed, and hiring more inexperienced teachers to lower the class sizes can actually have a net negative effect. Indeed, the evidence suggests that having superior teachers with somewhat larger classes will produce better outcomes on average than having more mediocre teachers with slightly smaller classes.

By contrast, the poll describes so-called "conservative reforms" with negatively charged words like "eliminate" and "at taxpayer expense" and omit any connection to the outcomes that "reducing costs" or tenure reform seek to accomplish (never mind running schools "like businesses"). One could easily rewrite all of the polling questions and come up with entirely different results. As I noted in the wake of a similar, union-funded poll:

Fortunately, we don’t have to imagine how the public would respond to fairly worded questions. Harvard University’s Program on Education and Governance conducts an annual survey of the public’s views on education policy that meets the highest standards for fairness and rigor. The survey eschews language designed to push respondents in a certain direction and often asks the same question with multiple wordings. According to the 2012 Harvard poll:

Note that while support fluctuates depending on the wording, no matter how Harvard asked the question there was still more support among parents for school choice than opposition.

Moreover, when asking about scholarship tax credits instead of vouchers, the support was even higher:

As with the earlier poll, the DFPE poll produced the results that its sponsors wanted.