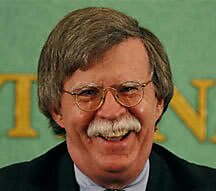 The Wall Street Journal’s editors have apparently plugged the word “Iran” into their John Bolton op‐​ed generator, and out comes the product: a proposal for bombing Iran. There’s not terribly much new in the piece to cover, but the Bolton piece does a good job of describing the hokey idea that bombing in order to buy time is a worthy endeavor:

…Israel is now at an urgent decision point: whether to use targeted military force to break Iran’s indigenous control over the nuclear fuel cycle at one or more critical points. If successful, such highly risky and deeply unattractive air strikes or sabotage will not resolve the Iranian nuclear crisis. But they have the potential to buy considerable time, thereby putting that critical asset back on our side of the ledger rather than on Iran’s.


With whatever time is bought, we may be able to effect regime change in Tehran, or at least get the process underway. The alternative is Iran with nuclear weapons, the most deeply unattractive alternative of all. (emphasis mine)

This is an awfully, awfully thin reed on which to base a case for starting another unprovoked war in the Middle East. Bolton concedes that bombing will not resolve the nuclear crisis, and concedes further that any delay (common estimates range from 3–7 years) resulting from air strikes may not allow for the regime to be changed.


So then what are we left with? The third U.S. war with a Muslim country in the last 7 years, with attendant casualties and the images beamed all across the Islamic world, further convincing Muslims that the United States is at war with Islam; the inevitable Iranian response that could range from annoying to catastrophic; a rally‐​around‐​the‐​flag effect in Iran, shoring up the position of Iran’s neoconservatives, who have driven the economy into the ground; the certainty that Iran will redouble its nuclear efforts, this time with massive support from its citizens; and a demonstration effect for all countries that the only sure way to stave off attack from the United States is to acquire a nuclear deterrent, tout de suite. That’s just off the top of my head. But maybe, somehow, we can engineer a coup or something in Iran in the five extra years that we will have purchased at the costs outlined above.


Let’s have this debate.