It’s Obvious Student Aid Is Driven by Politics. But Not This Obvious 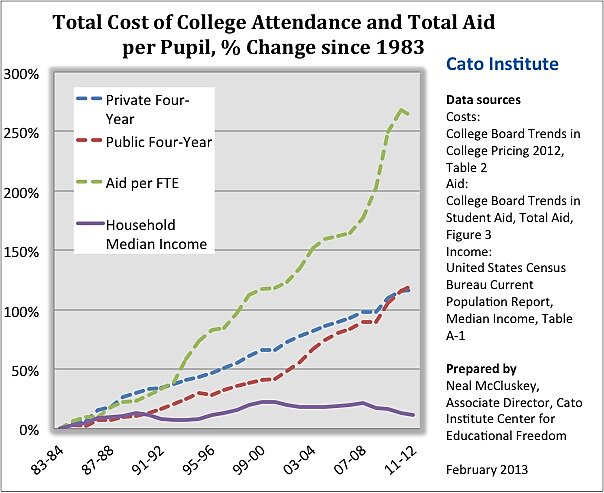 Federal aid for college students, it’s really no secret, is driven by what works politically, not what’s best for students. While logic and evidence strongly suggest that aid mainly enables colleges to raise their prices at breakneck speeds, politicians talk nonstop about aid making college “affordable.” Financial reality simply does not trump appearing to “care.” But on Friday, the Obama administration appears poised to take aid exploitation to a new level.


Tomorrow, the President will host what sounds like will be a textbook, campaign‐​style event featuring lots of no doubt somber – but oh‐​so‐​grateful‐​to‐​the‐​President – looking college students. With the photo‐​op thus set up, Mr. Obama will demand that Congress do something to stop the impending doubling of interest rates on subsidized federal loans from 3.4 percent to 6.8 percent.


But the GOP‐​led House has done something, and it is largely along the lines of what the President has called for. Last week, the House passed legislation that would peg student loan interest rates to 10‐​year Treasury bills, and would even cap rates at 8.5 percent or 10.5 percent, depending on the type of loan. It’s not exactly what the President wants – rates will vary over the life of the loan rather than being set at the origination rate, and the add‐​on to T‐​bill rates is higher – but the plans are still pretty close.


At this point, you’d think the President would be negotiating, not grandstanding. But then you wouldn’t understand federal student aid (or, really, almost anything government does). It is first and foremost about politicians – who are normal, self‐​interested people – getting what they need: political support, not sane college prices. And you get a lot of that support by appearing to want to “help people” more than the other guys.


If ever there will be a blatant, inescapable demonstration of what really drives federal aid policy, it will be the event we are likely to witness tomorrow. Let’s hope the public will get the right message: Politicians aren’t primarily driven by a desire to make college affordable. They’re driven by a desire for political gain. And that’s why we need them to get out of the student aid business.