I'm testifying tomorrow to the Joint Economic Committee about "The Economic Costs of Debt-Ceiling Brinkmanship."

I won't give away what I'm going to say (though you can probably figure out my views rather easily by reading this, this, and this), but I do want to share a chart from my testimony.

It shows that it is remarkably simple to balance the budget with a modest amount of spending restraint.

Based on Congressional Budget Office data, we can balance the budget in just three years if spending grows by "only" 1 percent per year. 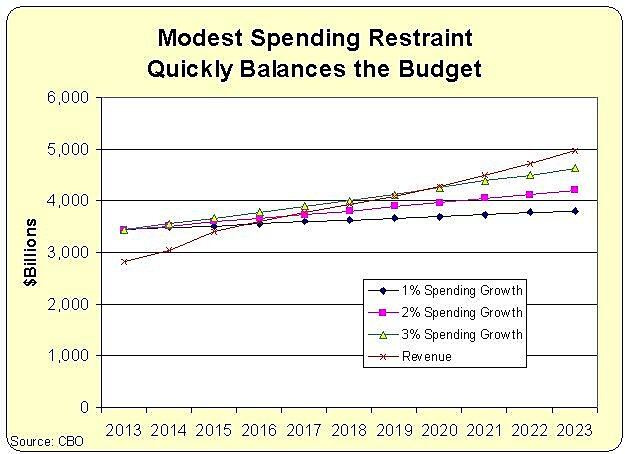 The chart also shows that you can balance the budget in just four years if spending is allowed to grow "just" two percent annually.

And if you for some reason think that the burden of government spending should rise faster than inflation, then we can balance the budget in seven years by restraining spending so that it grows 3 percent each year.

Here are a couple of relevant observations.

That being said, one of the reasons that it's so simple to balance the budget is that we've actually enjoyed two consecutive years of government spending being lower than it was the year before. Something to keep in mind just in case you thought the Tea Party didn't make a difference or if you didn't think sequestration was a big victory.

Here's the video I keep recycling that explains why it's important to restrain the growth of spending—in part because when you address the disease of spending, you easily deal with the symptom of deficits.

If it worked for Bill Clinton, it could also work for Barack Obama.