Since September 2012, I have been estimating Iran’s inflation rate – which briefly reached hyperinflation levels in October 2012 – using a standard, widely-accepted methodology. By measuring changes in the rial’s black-market (read: free-market) U.S. dollar exchange rate, it is possible to calculate an implied inflation rate for Iran.

When we do so, a much different picture of Iran’s inflation emerges. Indeed, Iran’s annual inflation rate is actually 82.5% – a rate more than double the official rate of 31.5% (see the accompanying chart). 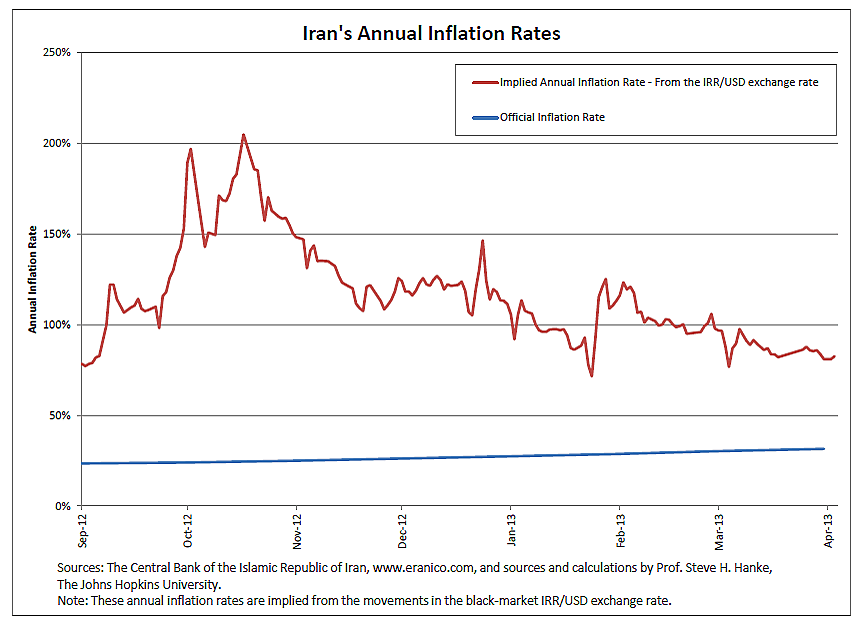 As I have documented, regimes in countries undergoing severe inflation have a long history of hiding the true extent of their inflationary woes. In many cases, the regimes resort to underreporting or simply fabricating statistics to hide their economic problems. And, in some cases, such as Zimbabwe and North Korea, the government simply stops reporting economic data altogether.

Iran has followed a familiar path, failing to report inflation data in a timely and replicable manner. Those data that are reported by Iran’s Central Bank tend to possess what I’ve described as an “Alice in Wonderland” quality and should be taken with a grain of salt.