Iran’s Economy, With and Without a P5+1 Agreement

The haggling between Iran and the so-called P5+1—the permanent members of the United Nations Security Council, plus Germany—is scheduled to come to a close on Monday, November 24th. The two parties each want different things. One thing that Iran would like is the removal of the economic sanctions imposed on it by the United States and its allies.

After decades of wrongheaded economic policies, Iran’s economy is in terrible shape. The authoritative Economic Freedom of the World: 2014 Annual Report puts Iran near the bottom of the barrel: 147th out of the 152 countries ranked. And the “World Misery Index Scores” rank Iran as the fourth most miserable economy in the world. In addition to economic mismanagement, economic sanctions and now-plunging oil prices are dragging Iran’s structurally distorted economy down. So, it’s no surprise that Iran would like one of the weights (read: sanctions) on its economy lifted.

Just how important would the removal of sanctions be? To answer that question, we use the Institute of International Finance’s detailed macroeconomic framework. The results of our analysis are shown in the table and charts below the jump. 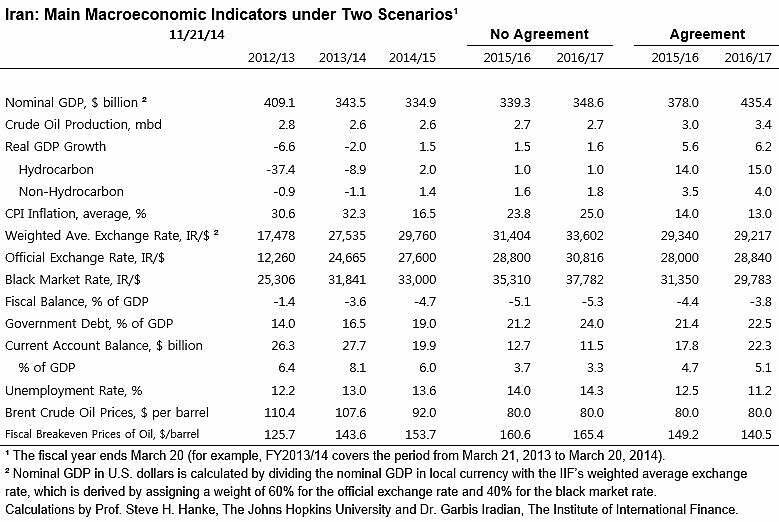 The trade and financial sanctions imposed since early 2012 have inflicted heavy damage on Iran’s economy. Indeed, we estimate that Iran’s real gross domestic product has contracted by a cumulative 8.6 percent during the past two fiscal years (2012/13–2013/14). We estimate the forgone annual economic output to be a whopping $79 billion. That is slightly more than twice the size of the Jordanian annual GDP of $36 billion.

Without an agreement, the Iranian economy will remain weak. On the other hand, a comprehensive agreement—one in which existing sanctions would be lifted gradually—would allow for steady increases in oil exports to their pre-sanction levels by the end of 2017 and a possible restoration of access to the global financial system. The economy would boom: indeed, the real GDP growth rates during the fiscal year 2015/16 and 2016/17 would jump by 4.1 and 4.6 percentage points, respectively. And for those two fiscal years alone, the cumulative GDP would be $125 billion greater than if the painstaking sanctions were left in place.

So, the economic benefits dangling in front of the Iranians are enormous. The unanswered question remains: what are the costs of coming to an agreement, as seen by the Iranians? The answer will be revealed on November 24th. 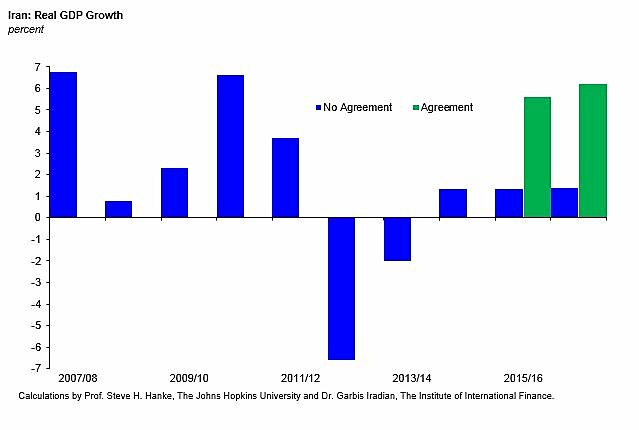 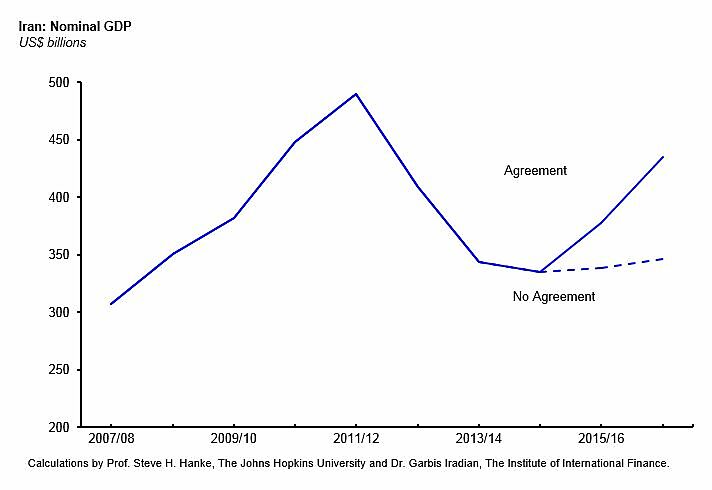