Since Hassan Rouhani assumed the presidency of the Islamic Republic of Iran in August of last year, the economic outlook for Iran has improved. When Rouhani took office, he promised three things: to curb the inflation which had become rampant under Mahmoud Ahmadinejad, to stabilize Iran’s currency (the Rial), and to start talks to potentially end the sanctions which have battered Iran since 2010. Rouhani has delivered on each of these promises. From this, one might assume that the Iranian economy, and the Iranian people, are headed towards better times.

Unfortunately, the Misery Index paints a different picture. The Misery Index is the sum of the inflation, interest, and unemployment rates, minus the annual percentage change in per capita GDP. It provides a clear picture of the economic conditions facing Iranians. 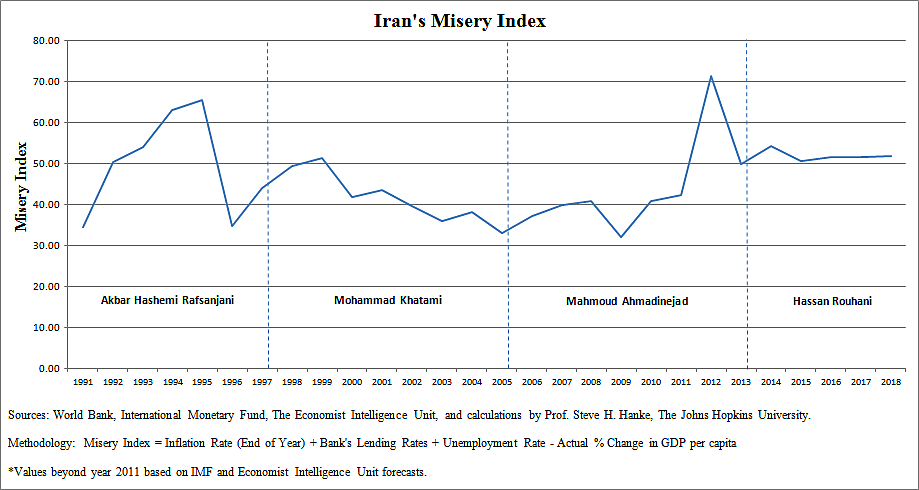 The accompanying Misery Index chart gives us both a snapshot of the Iranian misery levels spanning the past three administrations, as well as a forecast of Iran’s future misery levels. Over the past three administrations, Iran’s miserable state of economic affairs has been driven in large part by its unstable currency and high inflation. The most dramatic peak in the Misery Index occurred in October of 2012, when, under Ahmadinejad, Iran’s monthly inflation rate reached 69.6 percent -- throwing Iran into a brief period of hyperinflation.

Rouhani’s administration has delivered on exactly what it promised, but now Rouhani is running into popular resistance to his administrations’ proposed cuts in fuel, electricity, and food subsidies – subsidies which were expanded greatly during the Ahmadinejad years.

And if the prospect of not being able to deliver on promised subsidy cuts and other economic reforms aren’t sobering enough, forecasts by the International Monetary Fund and The Economist Intelligence Unit indicate that Iran’s Misery Index will probably remain elevated for the next four years. Inflation, though stabilized since the 2012 hyperinflation episode, is predicted to remain above 20 percent in the next few years. Meanwhile, GDP growth is predicted to remain low, and unemployment and lending rates are predicted to remain high.

While Rouhani has been successful in pulling Iran out of its death spiral, the economy has settled into stagflation (high inflation coupled with low GDP growth). Projections of the Misery Index levels suggest that Iranians’ will remain, well, miserable, for some time.