Iran: From Hyperinflation to Stability?

With the announcement on Saturday night that Iran and the P5+1 group reached a tentative deal over the Iranian nuclear program, the Iranian rial appreciated 3.45% against the dollar on the black market. The rial jumped from 30000 IRR/USD on Saturday November 23rd to 29000 IRR/USD on Sunday November 24th. A daily appreciation of this magnitude is rare. In fact, it has occurred fewer than ten times since the beginning of 2013. Indeed, this indicates that the diplomatic breakthrough is having a positive effect on Iranian expectations.


Over a year ago, I uncovered the fact that Iran experienced a period of hyperinflation (in early October 2012), when its monthly inflation rate peaked at 62%. Since then, I have been actively monitoring and reporting on the IRR/USD black market exchange rates and calculating implied inflation rates for the country.


Since Hassan Rouhani took office, on August 3rd, Iranian expectations about the economy have turned less negative. Thus far, it appears Rouhani has been successful in ending the long period of economic volatility that has plagued Iran, since the US imposed sanctions in 2010. This has been reflected in the black‐​market IRR/USD exchange rate, which 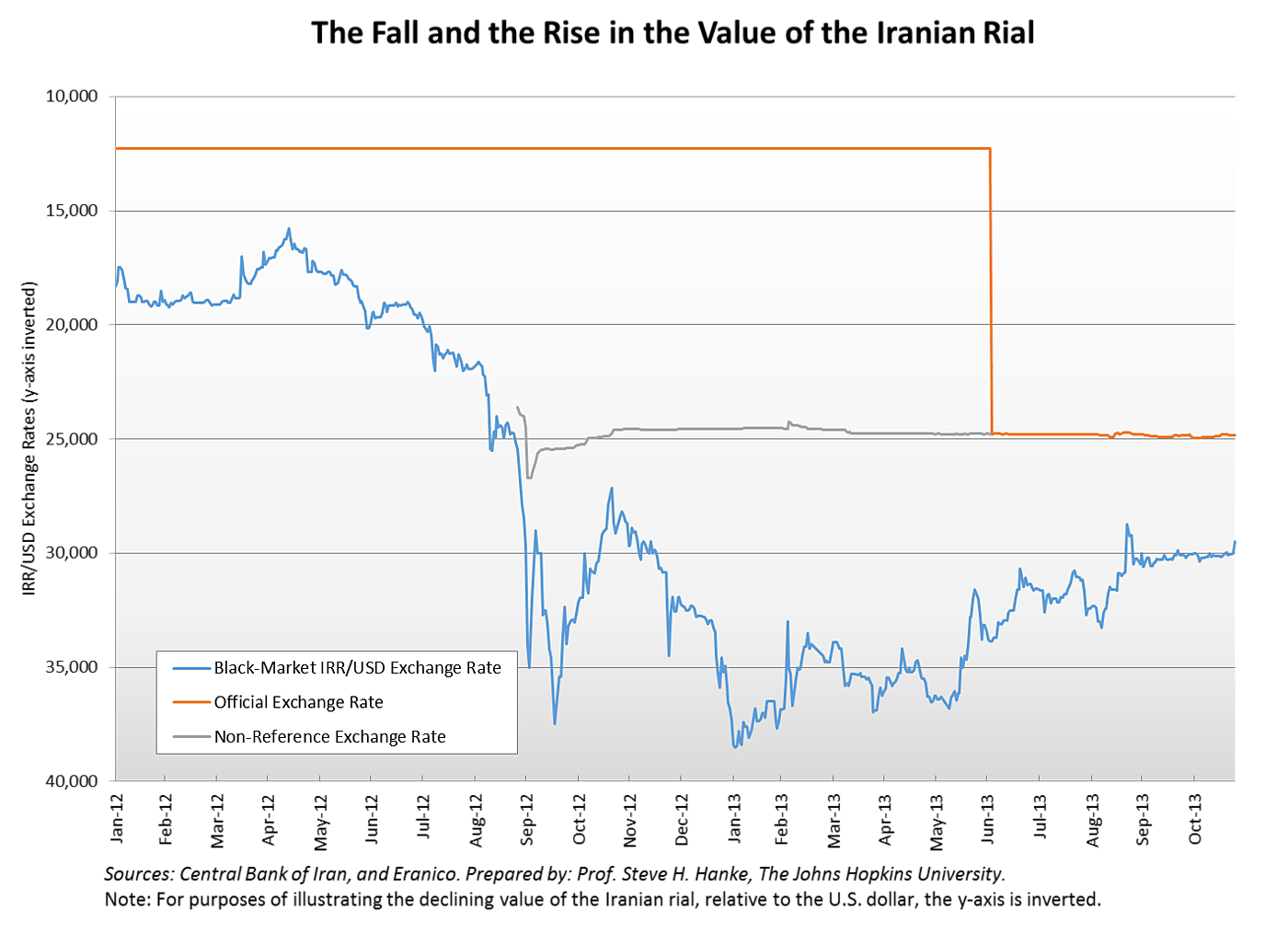 There are three main factors at work here. The first is a concerted effort by the Rouhani administration and the central bank to curb Iran’s inflation. This stands in stark contrast to the previous regime, whose strategy was to simply deny that inflation was a problem.


The second is that that Iran’s economy has proved remarkably “elastic” – meaning that the country has ultimately adapted to the sanctions regime and has found ways to keep its economy afloat in spite of them.


The third factor in the rial’s recent stability is an improvement in Iranian economic expectations. This is where the P5+1 talks come into play. Iranians recognized that easing of the sanctions regime would be a bargaining chip in any nuclear negotiations. In consequence, their economic expectations improved as the talks progressed. Indeed, Saturday’s announcement gave these expectations a shot in the arm.


In light of the rial’s recent stability, I have delisted the rial from my list of “Troubled Currencies,” as tracked by the Troubled Currencies Project. For starters, the rial no longer appears to be in trouble. And, on a technical note, implied inflation calculations are less reliable during sustained periods of exchange rate stability.


That said, we must continue to pay the most careful and anxious attention to the black‐​market IRR/USD exchange rate in the coming months. Like the P5+1 agreement, Rouhani’s economic progress in Iran is tentative and likely quite fragile. Since the black‐​market IRR/USD is one of the only objective prices in the Iranian economy – and perhaps the most important one of all – it will continue to serve as an important weather vane, as the diplomatic process continues, and as Iran’s economy gradually moves into a post‐​sanctions era.