The IPCC Is Pretty Much Dead Wrong

As the U.N.’s Intergovernmental Panel on Climate Change (IPCC) nears completion of its Fifth Assessment Report, it is becoming obvious that not only is the report going to obsolete on the day that it is released, but that it will be dead wrong as well.

We have discussed the implications of the IPCC’s failure to adequately ingest new literature—a failure that results partially from the cumbersome IPCC process and partly because the IPCC doesn’t want to include some findings that run counter to its storylines. The major implication being, of course, that the IPCC reports mislead policymakers around the world, which has a trickle-down effect on all of us who are subject to any resulting policies.

In our post on Monday, we noted the following passage from the “leaked” Summary for Policymakers of the upcoming Fifth Assessment Report:

[Climate] Models do not generally reproduce the observed reduction in surface warming trend over the last 10–15 years. There is medium confidence that this difference between models and observations is to a substantial degree caused by unpredictable climate variability, with possible contributions from inadequacies in the solar, volcanic, and aerosol forcings used by the models and, in some models, from too strong a response to increasing greenhouse-gas forcing. [italics in original]

We were generally pleased to see the IPCC admit that climate models are largely failing to capture the rate of rise (or lack thereof) of the global average surface temperature observed over the past 10-15 years. As we pointed out on Monday, we had written as much ourselves a few years ago.

But, the IPCC went way wrong in this paragraph in which they stated:

There is very high confidence that climate models reproduce the observed large-scale patterns and multi-decadal trends in surface temperature, especially since the mid-20th century. [italics in original]

Our work, mentioned above, focused on short-term trends. Figure 1 shows our primary result updated with data through July 2013. It shows the current trend in global average surface temperature for periods ranging from 5 years to 15 years (dotted colored lines) set against the projections from the collection of climate models used in the IPCC's Fourth Assessment Report (published in 2007). The thick black line is the multi-model mean projected temperature trend and the thin blue lines represent the 95 percent range of model projections. The blue lines converge as the time period over which the trend is calculated increases because the influence of natural variability (a presumably random process, declines). 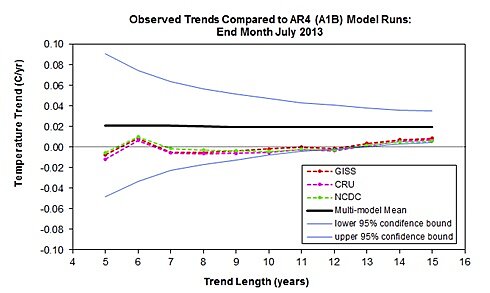 It is pretty obvious, and recognized by the IPCC (in the first block quote above), that during the past 10 to 15 years, the observed trend falls very close to the lower bound of the climate model projections—indicating a near failure (statistically-speaking anyway) of the climate models to anticipate reality.

From this, you may wonder how it is that the IPCC admits that the models perform so poorly on the decade to decade-and-a-half time scale but that they have “very high confidence that climate models reproduce the observed large-scale patterns and multi-decadal trends in surface temperature, especially since the mid-20th century.”

And over at her blog, The Blackboard, Lucia Liljegren wonders the same thing.

Lucia was on our research team, which produced the results in Figure 1, assessing the performance of climate models used in the IPCC’s Fourth Assessment Report (AR4). Since then, she has been examining the results of the new generation of climate models underlying the IPCC’s upcoming Fifth Assessment Report (AR5). And while when it comes right down to it, there really isn’t much difference between the AR4 and the AR5 climate model projections of the evolution of the earth’s average surface temperature (so our results are still applicable), Lucia has been extending the period over which she is comparing the trends. Instead of stopping at 15 years, she has extended the comparison to 25 years (and, preliminarily, even longer).

Figure 2 shows her results for periods of 15 to 25 years, in a graphical format similar to Figure 1 above. 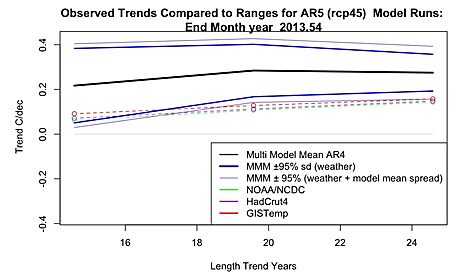 The observed trend in the global average surface temperature from three different compilations for periods ranging in length from 15 to 25 years ending in July 2013 (dotted lines). The mean projected trend from the collection of models (CMIP5) used in the IPCC’s Fifth Assessment is indicated by the thick black line while the 95 percent range of the collection of model trends in indicated by the thin blue lines (see here for more detail).

At the longer trend lengths, the models do even worse, as the observed trends fall at or below the lower bound of the 95 percent range of the collection of model projections. This prompted Lucia to comment:

Lucia is left to wonder whether the “leaked draft is a hoax.”

Maybe they will rectify the situation at the upcoming meeting later this month in Stockholm where they are set to approve the final document. Our guess is that they won’t, and instead will go forward with an outdated and misleading report.

If this proves to be the case, it may well be part and parcel to the IPCC’s ultimate demise.