Internet Industry More Popular Than Ever‐​60% Have Favorable View

New polling from Gallup finds that more Americans view the internet industry favorably than any time since Gallup began asking the question in 2001. Today, 60% of Americans have either a “very positive” or “somewhat positive” view of the industry, compared to 49% in 2014. 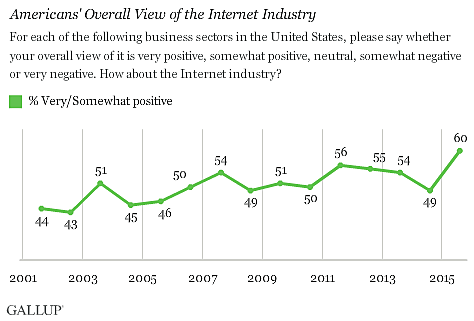 
Perceptions have improved across most demographic groups, with the greatest gains found among those with lower levels of education, Republicans and independents. It is likely these groups are “late adopters” of technology and have grown more favorable as they’ve come to access it. Indeed, late adopters have been found to be older, less educated and more conservative. Pew also finds that early users of the Internet have been younger, more urban, higher income Americans, and those with more education. Indeed, as Internet usage has soared from 55% to 2001 to 84% in 2014, many of these new users come from the ranks of conservative late adopters.


These data suggest the more Americans learn about the Internet the more they come to like it and appreciate the companies who use it as a tool to offer consumer goods and services.