It is challenging to calculate the industrial output for post-socialist transition economies. However, through meticulous work based on internationally recognized statistical standards over two decades, two Russian economists currently associated with the Higher School of Economics in Moscow, Eduard Baranov and Vladimir Bessonov, were able to produce a statistical time-series for the main branches of Russian industry and for the industrial sector as a whole.

The table below summarizes their findings on the physical volume of industrial output in Russia from January 1990 until March 2013. January 1990 marked the end of economic growth in the territory of contemporary Russia (when Russia was still part of the former USSR) as well as the beginning of the late Soviet Union’s economic crisis. March 2013 is the most recent month for which data is available.

No word describes these numbers better than “catastrophe”. As the data shows, the current level of Russian industrial output is still almost a quarter lower than it was in the time of the Soviet Union.

The only major sector that was able to increase its output over the last 23 years is the gas industry (by 17.1%). The output in every other major industrial sector has decreased. The size of the machine-building sector was reduced by 16.4%. The output in the chemical industry fell roughly by half. And light industry essentially ceased to exist.

Nor has this poor performance been only a recent phenomenon. As the graph below shows, with the exception of gas, industrial output in all major sectors has been dismal since the fall of the Soviet Union. 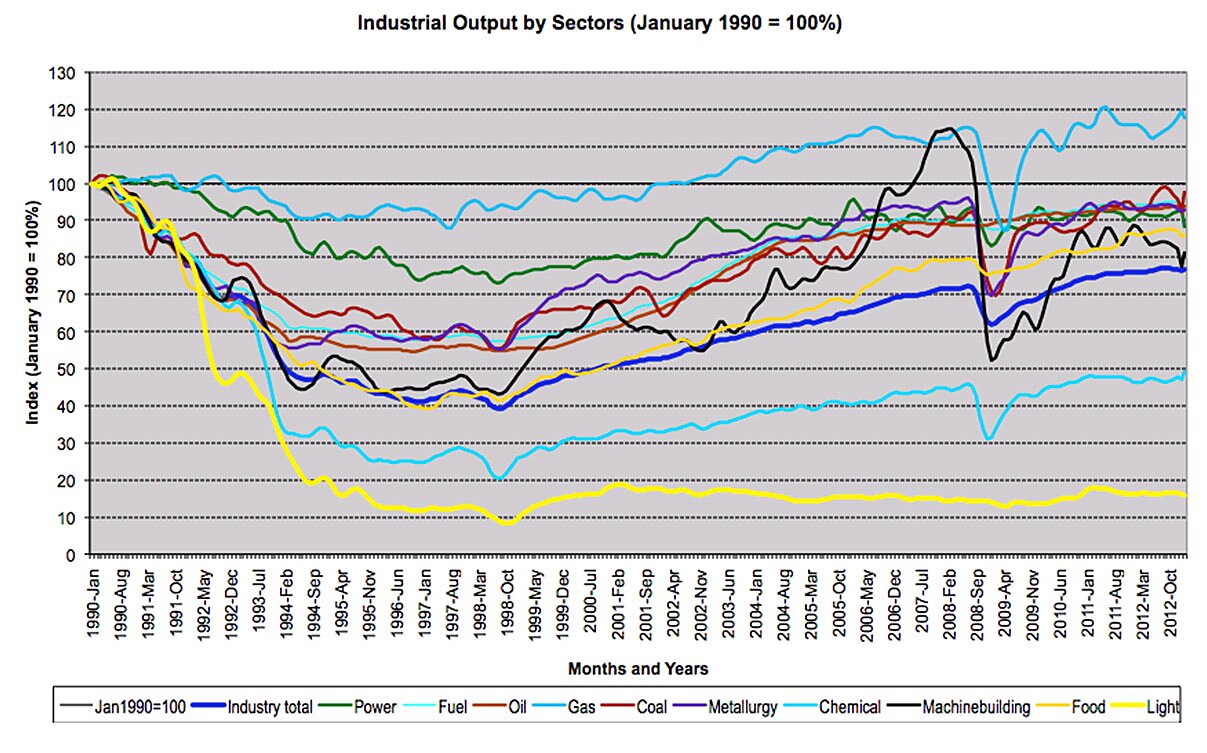 Possible explanations for the Russian industrial catastrophe might be grounded in a number of entirely reasonable arguments – such as the necessity to reduce the production of unnecessary, uncompetitive products manufactured en masse in the former USSR; to the inevitable changes in the structure of domestic and international demand since the opening of the Russian economy to the world market; or the tough competition from fast-growing emerging economies like China.

But those conditions were also faced by other post-Soviet countries, some of which managed to grow and increase industrial output over the past two decades. The main cause of Russia’s “Great Depression” has been its extensive interventionist and often arbitrary policies. Successive Russian administrations pursued policies that both destroyed substantial portions of the Soviet economic heritage and were unable to fully unlock the entrepreneurial resources and energy of the market economy, introduced in the late 1980s and early 1990s.