The increase of human smugglers transporting unauthorized immigrants to the United States is likely a consequence of more effective border enforcement.  Although the Obama administration has de-emphasized internal immigration enforcement after 2011, his administration has ramped up enforcement along the border – focusing on increasing the legal and economic costs imposed on unlawful immigrants apprehended while trying to enter the United States.  Since border and internal enforcement are substitutes, the shift in resources and increase in penalties for unlawful crossers does not represent a decrease in total enforcement.  Matt Graham from the Bipartisan Policy Center wrote an excellent breakdown of the reprioritization of immigration enforcement, the increase in penalties, and how it has deterred unauthorized immigration. 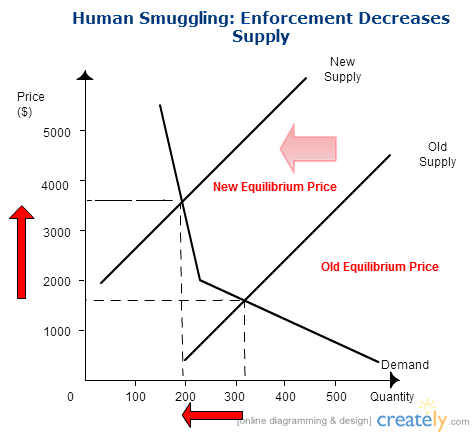 The immigrants most likely to have inelastic quantity demand for human smuggling are those fleeing violence or seeking to reunite with their families in the United States.  An increase in smuggling price will not much decrease the quantity of smuggling demanded by parents seeking to reunite with their children and children fleeing the threat of death.  Smugglers know that children reuniting with their families and those fleeing violence are the most likely to pay high prices, thus the smugglers have focused on recruiting those groups as customers – one large reason why so many unaccompanied children (UAC) are transported to the border by smugglers. 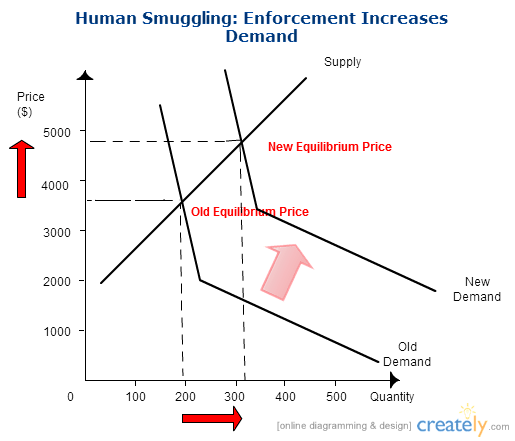 From 1972 to 2003, a 10 percent increase in the number of border patrol enforcement hours increases the price that smugglers can charge by 2.5 to 3.8 percent.  Line watch hours have grown by over 400 percent since the early 1990s.

The economics of industrial organization can shed some light on why smugglers have shifted from mom and pop operations to large, organized, and violent criminal cartels who now seek children clients instead of adults.  Mom and pop smugglers ran small and unsophisticated operations to smuggle immigrants over the border.  As border patrol cracked down on them and put many out of business, more intensive smuggling operations that required more capital, planning, and violence to overcome enforcement were needed to satisfy the demand.  As a result of the shrinking mom and pop smuggling operations, serious criminal organizations and drug gangs have become specialized in smuggling migrants because of the higher profits.  The shift from mom and pop smugglers to sophisticated criminal smugglers that focus on smuggling those with an inelastic demand for smuggling is the result of larger and more effective border enforcement.

Another consequence of higher smuggling prices is that migrants have to work for a longer period of time in the United States to justify the larger financial cost of immigrating.  As a result, migrants do not return to their home countries as frequently and many end up making the United States their permanent home.  This also incentivizes unlawful immigrants to send for their children after they arrive in the United States – further increasing the quantity demanded for smuggling.