Last week, we published a short blog post looking at whether immigrants litter more than native‐​born Americans. That post was motivated by a segment on Tucker Carlson Tonight where he and Seth Barron, associate editor of City Journal, talked about how a neighborhood in New York City was filthy and full of trash because immigrants who live there dump trash on the ground. Besides showing scary‐​looking photos and videos of trash on the ground, Barron and Carlson offered no evidence that immigrants litter more. They weren’t the first to make such claims without evidence.

The responses to our post, which was a simple regression between the share of a city’s population that was foreign‐​born and complaints about trash in the American Housing Survey (AHS), ranged from confusion to thoughtful parsing of the available evidence to links to a 2001 survey that didn’t ask about immigrant littering behavior. Many commentators weren’t happy and some had good reason because our simple regression didn’t test whether immigrants had a higher tolerance for trash, the quality of the data and the survey question weren’t ideal, there are vast endogeneity concerns, the sample size was small, and the size of the geographic unit was vast. All fair points.

The burden of providing evidence for anti‐​immigration claims (or any claim) rests on those who make them, but they rarely do so. As a result, we looked around for additional ways to measure littering and trash patterns in American cities. We found geocoded records of nearly 4 million 311 calls that request city cleanup services in San Francisco during 2008–2019. We compared the density of 311 complaints with local Census tract demographics. In most specifications, we find no statistically significant relationship between the share of the population that is foreign‐​born and reports of litter. However, some specifications show a negative relationship, meaning that some neighborhoods with more foreign‐​born, particularly noncitizen, residents produce fewer 311 trash complaints. Focusing on the Hispanic foreign‐​born resident population as the independent variable reveals no statistically significant relationship with 311 trash complaints.

This blog post explains our methodology, findings, brief discusses them, and then concludes in that order. As always, our dataset is available upon email request to one or both of us.

Our first data source is the 311 call record for the City of San Francisco for 2008–2019. The 311 phone line can be used by people in San Francisco to request city services, information, file complaints, or report various issues anywhere in the city such as littering, property damage, graffiti, homeless encampments, and other issues. Through its open data initiative, the San Francisco city government makes data on these calls available with information regarding the call’s date, type of request, details on the request, location by latitude and longitude, the outcome of the complaint, and other data that are all compiled into a case.

The initial 311 calls dataset contained 4 million cases and required a bit of data cleaning. We narrowed down the dataset to 311 call requests for street cleaning and litter removal, property damage, homeless issues, and homeless encampment removal. We then filtered out duplicate cases and those that did not contain valid latitude and longitude coordinates. With these selected cases, we match each case to a Census tract using the provided latitude and longitude coordinates and the 2017 Tiger/​LINE shapefiles from the Census Bureau. We could not use this method to assign a geographic location to the 311 calls for 16 cases. Fortunately, each case has an address assigned to it and we were able to use a geocoding tool developed by the Federal Financial Institutions Examination Council (FFIEC) to match these cases to their proper Census tract. This step revealed 212 cases that were not reported in San Francisco county that we then removed. After applying those filters and cleaning the data as we described, we were left with 1,701,499 cases.

Our second data source is the American Community Survey (ACS) 2013–2017 5‐​year estimate. The ACS is our source for the demographic and economic data for each Census tract in San Francisco that we match up with the geocoded 311 calls. A Census tract is a small geographic region with an average population of about 4,000. San Francisco has a total of 196 Census Tracts, but six of them are located in areas that are either underwater or in park areas. Thus, we only have 190 populated tracts in our main analyses. Due to data disclosure policies and the small population of Census tracts, the Census Bureau only releases data for areas with fewer than 65,000 residents in its 5‐​year estimates. From these data, we compute population shares by nativity in each Census tract, including the share that is native, foreign‐​born, naturalized, and noncitizen. We further collect data on population shares for Hispanic foreign‐​born residents.

We then map Census tracts into official San Francisco neighborhoods using a crosswalk available from the city’s open data platform.

To test whether immigrant neighborhoods receive more litter complaints, we look at a cross‐​section of San Francisco Census tracts. We run a set of basic regressions to test the correlation between 311 cases and Census tracts’ share of foreign‐​born residents. In each regression, we regress the cumulative number of 311 cases over 2008–2019, expressed as a log rate per 1,000 residents, on the share of native and foreign‐​born residents from the ACS, using a neighborhood fixed effect. Neighborhood fixed effects are important because they allow us to control for common, unobserved factors that affect Census tracts within the same neighborhood, such as neighborhood attitudes towards cleanliness and their propensity to report trash or litter.

Our first regression has the various measures of the immigrant populations as the independent variables and litter reports as the dependent variables, controlling for neighborhood fixed effects (Table 1). We find no significant correlation between average litter reports and the native, foreign‐​born, and naturalized shares of the population. However, we find that a percentage point increase in a Census tract’s noncitizen share is correlated with an 8 percent decline in the litter reporting rate that is significant at the 5 percent level (Table 1, column 4). 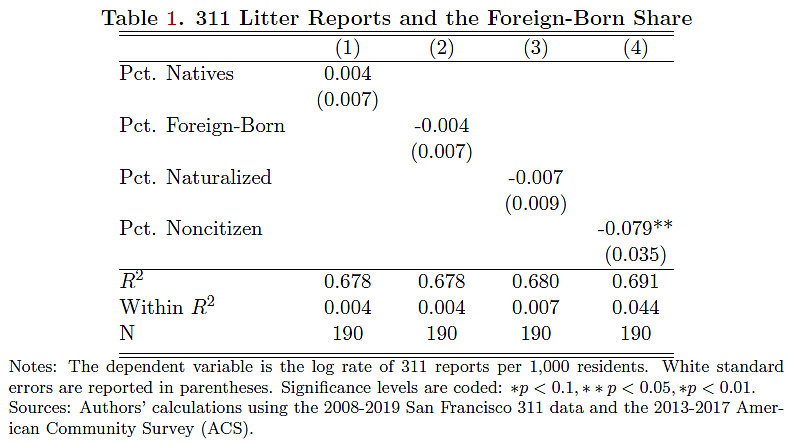 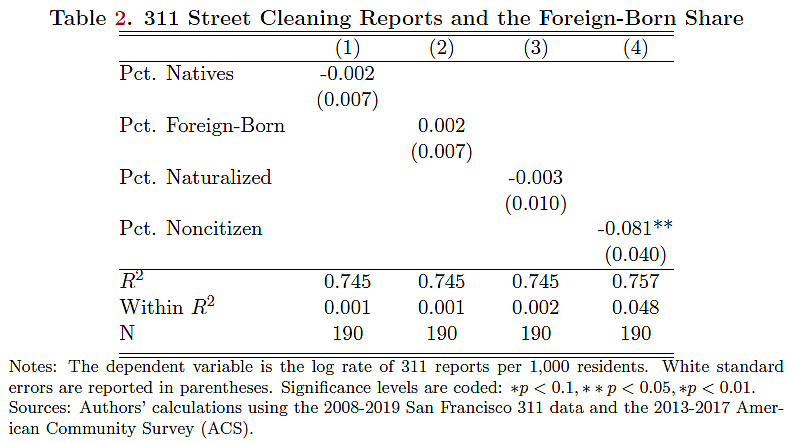 We next test the correlation between immigrant shares and homeless concern reports (Table 3). According to the San Francisco 311 website, “homeless concern” reports include aggressive behavior or panhandling, leaving hazardous waste, trespassing on private property, and public intoxication. Similarly, we find a negative, significant association between homeless concern reporting rates and a Census tracts’ noncitizen population share of around 10 percent, although it is only significant at the 10 percent level. 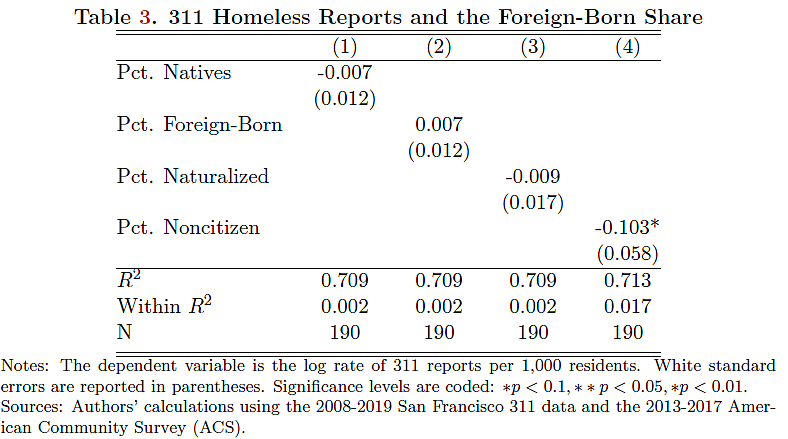 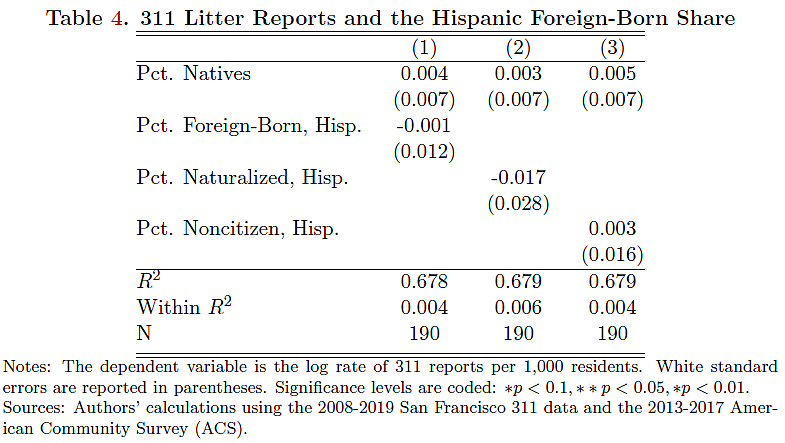 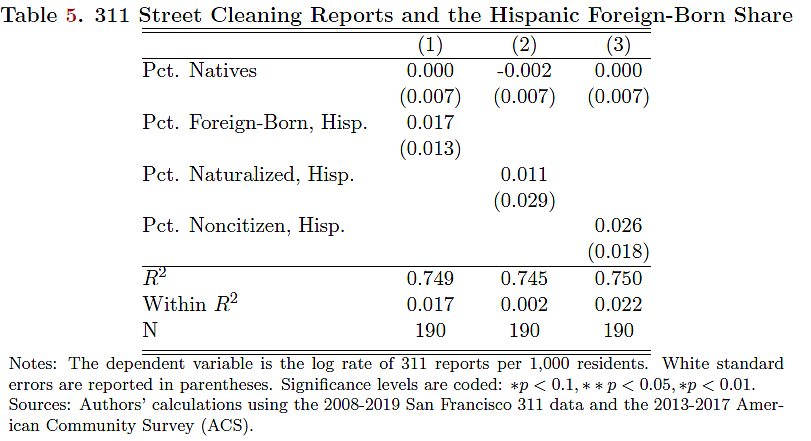 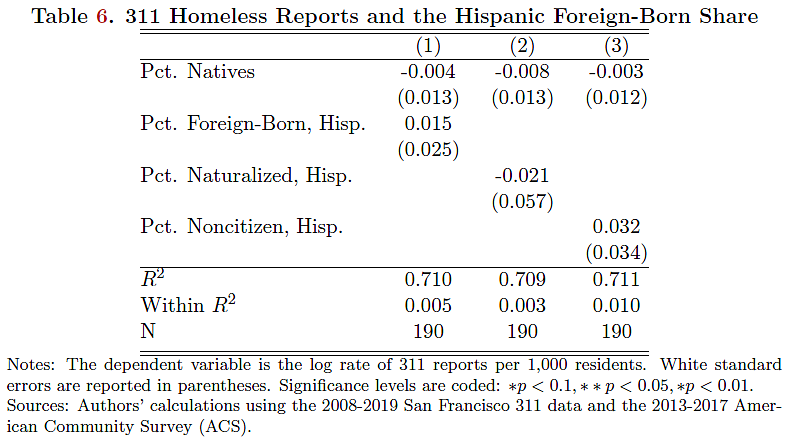 The geographic locations of homeless people, as measured by 311 calls reporting homeless concerns, are significantly correlated with complaints for litter, street cleaning requests, and all incidents combined at the 10 percent level. Most readers won’t be surprised that the location of the homeless population in San Francisco is correlated with litter and street cleaning complaints, but controlling for the foreign‐​born population has virtually no effect on the regression results in Table 7. Like our previous results, the coefficients on the foreign‐​born share remain insignificant.

There are numerous reasons why the foreign‐​born share of a Census tract is not related to the number of 311 cases. The first possibility is that immigrant Census tracts have less litter and fewer homeless concerns. The second possibility is that immigrants have lower standards of cleanliness, so they are less likely than native‐​born Americans to call 311 ceteris paribus.

Our second concern is greater for our first blog post, which analyzed AHS response data about the person’s neighborhood of residence. Since anybody can make a 311 call from anywhere in San Francisco about trash in any other section of the city, native‐​born Americans could call 311 if they are traveling through San Francisco city Census tracts where immigrants are more likely to live. Although this doesn’t resolve the concern about differing cleanliness standards, it should increase confidence in our results.

The third possibility is that endogeneity issues are extreme here. We cannot make causal statements about immigrants littering less, we can merely show that there are fewer 311 calls about trash in San Francisco Census tracts where they live. There are other variables that influence whether a neighborhood is dirty enough to receive 311 complaints. We included controls for a few of them like housing value and median family income, but the regression results were nearly identical to the tables we reported above. Neighborhood fixed effects will have to suffice.

The fourth possibility is that trash pickup in San Francisco is excellent and cleans up neighborhoods before people have a chance to call 311. Thus, immigrants might be greater litterers but the super‐​efficient city government (don’t laugh, we’re trying to be serious) cleans up their mess before other city residents report the trouble.

This second blog post in the Great Litter Debate of 2019 is an attempt to provide better evidence in this difficult to resolve disagreement. In San Francisco, a city fiercely criticized by immigration restrictionists and conservatives for its very real sanitation problems, there is no association between immigrant resident populations by Census tract and 311 complaints about garbage. Proponents of the “immigrants litter” theory have supplied zero evidence to support their claims. If they don’t like these analyses, we invite them to conduct their own. After all, numerous cities make these data readily available, such as New York, Los Angeles, Chicago, and the District of Columbia to name a few.