There are very few new arguments in the immigration debate. For generations, people have batted around similar versions of the same argument in favor or against different immigration policies such as how immigrants affect wages, voting, crime, and terrorism. There are other fringe arguments that crop up now and again, but we don’t usually address them because they are so rarely argued. However, the frequency of a formerly‐​fringe argument against immigration is rising: immigrants should be banned or their numbers significantly reduced because they litter a lot.

At the recent National Conservatism conference, University of Pennsylvania law professor Amy Wax argued in favor of restricting non‐​white immigration to the United States because she said they litter more. My colleague David Bier was heckled at the Conservative Political Action Conference in 2018 and asked about immigrant littering. Fox News Tucker Carlson has been bringing up immigrant littering over the years, most recently with the help of City Journal associate editor Seth Barron.

But do immigrants litter more?

Fortunately, there are data available to at least partially answer this question. The American Housing Survey (AHS) is a biennial longitudinal housing survey that asks about the amount of trash, litter, or junk in streets, lots, or properties within a half‐​block of the respondent’s housing unit. The answers are a “small amount of trash,” a “large amount,” and “no trash.” We constructed a scale from zero to one using a min‐​max normalization for all non‐​missing observations where a higher value indicates more trash in a neighborhood. We then take a weighted average of these scores using the weighting variable present in the AHS public use file for each metropolitan area. 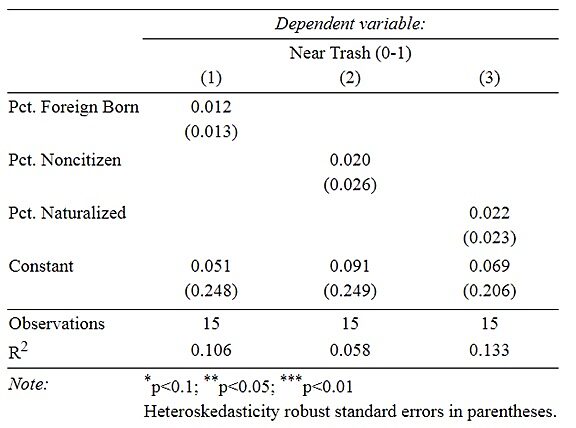 Figure 1
Litter and the Percent Foreign‐​Born, by CBSA

If you’re going to go on television to complain about immigrants systematically littering in major cities, run a segment that claims as much, or make such a statement to support major changes in immigration law, you had better have some evidence supporting your position. Litter has played an outsized role in the immigration debate on both sides of the issue and could be a more serious problem at the border. But when it comes to the problem of litter in American cities caused by immigrants, we’re going to need to see some evidence.