For the people of China, there's good news and bad news.

The good news, as illustrated by the chart below, is that economic freedom has increased dramatically since 1980. This liberalization has lifted hundreds of millions from abject poverty. 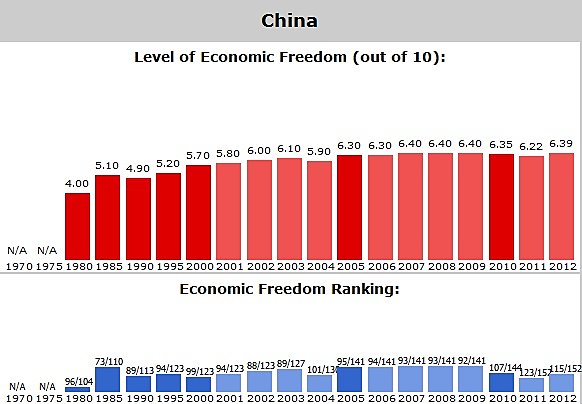 The bad news is that China still has a long way to go if it wants to become a rich, market-oriented nation. Notwithstanding big gains since 1980, it still ranks in the lower-third of nations for economic freedom.

Yes, there's been impressive growth, but it started from a very low level. As a result, per-capita economic output is still just a fraction of American levels.

If you look at the Fraser Institute's Economic Freedom of the World, there are five major policy categories. As you can see from the table below, China's weakest category is "size of government." I've circled the most relevant data point.

China could--and should--boost its overall ranking by improving its size-of-government score. That would reduce the burden of government spending and lower tax rates.

With this in mind, I was very interested to see that the International Monetary Fund just published a study entitled, "China: How Can Revenue Reforms Contribute to Inclusive and Sustainable Growth."

Did this mean the IMF is recommending pro-growth tax reform? After reading the following sentence, I was hopeful:

After all, surely you make the "transition to high income status" through low tax rates rather than high tax rates, right?

Tax revenue has accounted for about 22 percent of GDP in 2013... The overall tax burden is similar to the tax-to-GDP ratio for other Asian economies such as Australia, Japan, and Korea.

So what did the IMF recommend? A flat tax? Elimination of certain taxes? Reductions in double taxation? Lowering the overall tax burden?

The bureaucrats want China to become more like France and Greece.

Amazingly, the IMF wants more "progressivity" even though the folks in the top 20 percent are the only ones who pay any income tax under the current system.

Around 80 percent of urban wage earners are not subject to the individual income tax because of the high basic personal allowance.

But a more punitive income tax is just the beginning. The IMF wants further tax hikes.

Broadening the base and unifying rates would increase VAT revenue considerably. ... Tax based on fossil fuel carbon emission rates can be introduced. ... The current levies on local air pollutants such as [sulfur dioxide] and [nitrogen oxides] emissions and small particulates could be significantly increased.

What's especially discouraging is that the IMF explicitly wants a higher tax burden to finance an increase in the burden of government spending. 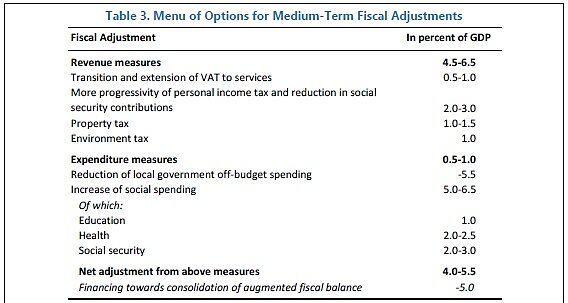 The study even explicitly says China should become more like the failed European welfare states that dominate the OECD:

Compared to OECD economies, China has considerable scope to increase the redistributive role of fiscal policy. ... These revenue reforms serve as a key part of a package of reforms to boost social spending.

No wonder the IMF is sometimes referred to as the Dr. Kevorkian of the global economy.

P.S.: If you want to learn lessons from East Asia, look at the strong performance of Hong Kong, Taiwan, Singapore, and South Korea, all of which provide very impressive examples of sustained growth enabled by small government and free markets.

P.P.S.: I was greatly amused when the head of China’s sovereign wealth fund mocked the Europeans for destructive welfare state policies.

P.P.P.S.: Click here if you want some morbid humor about China's pseudo-communist regime.

P.P.P.P.S. Though I give China credit for trimming at least one of the special privileges provided to government bureaucrats.