With Hurricane Laura Hammering the Gulf, Why Are U.S. Energy Markets So Calm?

An increasingly common refrain in Washington these days is that America's liberalized financial markets and trade policies have made the U.S. economy less resilient to pandemics, wars, or other major shocks, and that more regulation is needed to ensure that Americans have access to essential goods at these perilous times. Hurricane Laura's muted impact on U.S. energy markets, however, provides a clear lesson that "openness" and "resiliency" are not mutually exclusive, and in fact that freer markets can actually reduce U.S. vulnerability to economic shocks.

As Laura makes landfall, the Wall Street Journal warns that it could endanger a substantial portion of U.S. fuel and petrochemical production capacity:

Refineries, petrochemical facilities and ports along the Gulf Coast were closing as Hurricane Laura barreled toward the Texas-Louisiana border....

Hurricane Laura’s winds and storm surge threatened much of America’s fuel-making and chemicals infrastructure. More than 20% of U.S. refining capacity, capable of processing roughly four million barrels of oil a day, is located within the storm’s potential path, analytics firm IHS Markit said. As of Wednesday afternoon, companies had closed or said they planned to shut nearly three million barrels a day worth of capacity, the firm said....

Almost half of the nation’s capacity to produce ethylene, a building block in plastics manufacturing, could shut if the Gulf’s petrochemical hub were hit in the right spot, market intelligence firm S&P Global Platts said. As of Tuesday, chemical makers in southeast Texas and Louisiana—including Motiva, BASF SE, Ineos Ltd. and Total—had already cut 20%, according to IHS Markit.

Despite all of these closures and the risk of significant damage to U.S. petroleum products manufacturing capacity and infrastructure, however, domestic prices for various petroleum products have barely budged. According to the aforementioned WSJ story and other recent articles, three factors contribute to this surprising resiliency:

First, the United States has substantial inventories of gasoline and petrochemicals, in part due to decreased demand from COVID-19, that can meet the immediate needs of U.S. manufacturers and consumers in other parts of the country. Second, a separate WSJ article explains how actions by banks, hedge funds, and other investors have kept oil prices (which drive fuel and chemicals prices) stable, despite unknown risks from COVID-19, Hurricane Laura, or other shocks:

After wild price swings this spring, hedge funds and other investors wagered that volatility would subside by selling options tied to West Texas Intermediate and Brent futures....

One way to do this is by selling so-called strangles. The trade involves selling a put option: this gives its owner the right to sell WTI futures at a set price by a certain date. Meanwhile, the investor sells a call option, which gives the owner the right to buy at a different price.

Funds that sell strangles are wagering that WTI futures will trade between the strike prices for the put and call options. The funds collect a premium, compensating them for the risk that prices break out of that range and the buyer exercises their right to buy or sell.

Strategies such as this are known as selling volatility. They have become commonplace in financial markets during a decade in which ultralow interest rates have prodded investors into creative methods of juicing returns.

In recent months, those strategies have helped to squash what is known as implied volatility in oil markets.

The US is structurally short of gasoline and imports a large amount from Europe. The recent upgrading of Laura to a hurricane and its projected path has forced several refiners in Texas and Louisiana to idle capacity or reduce runs, putting pressure on domestic gasoline production....

Charterers may have slowed cargo bookings to wait and see the extent of the hurricane's impact. But the disruption to refinery operations so far should still have a substantial impact on US demand for gasoline imports.

Argus was speaking only to gasoline, but U.S. Energy Information Administration data show that the United States - despite being a global energy powerhouse (thanks, fracking!) - still imports more than 800 billion barrels of non-crude petroleum products each year, from a wide variety of sources (both friendly and less-so). These alternative supplies should further mute any impact that Laura might have on U.S. energy markets and the economy more broadly. 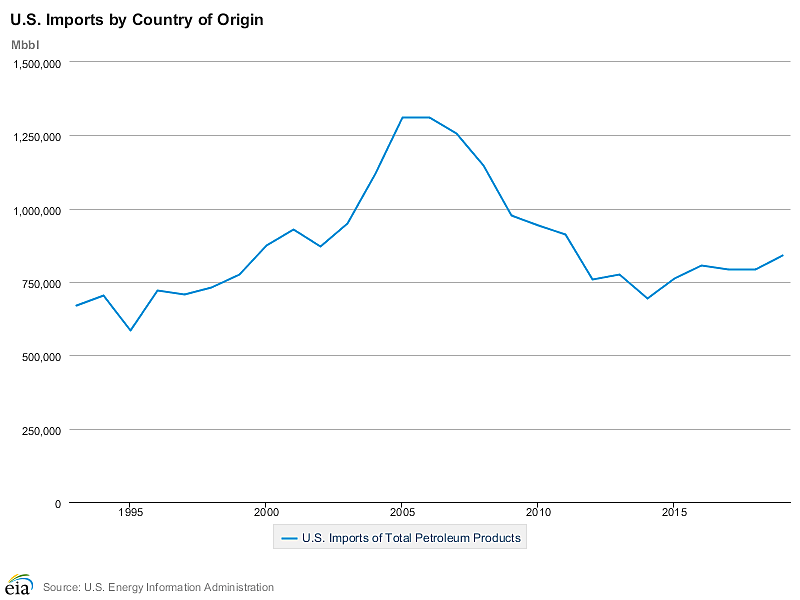 Immediate benefits aside, this episode also provides important lessons for the ongoing debate in Washington about "essential" goods and U.S. "resilience" to economic shocks. First, it demonstrates that boosting domestic production of essential goods like energy or pharmaceuticals -- through trade restrictions or other types of government regulation -- will alone not guarantee a more "resilient" or "secure" U.S. economy, because, while less openness might make an economy less vulnerable to external supply or demand shocks, it also helps increase a nation’s vulnerability to domestic shocks. As Columbia's Center on Global Energy Policy noted after Hurricane Harvey in 2017, "[t]he flipside of US energy ‘dominance,’ and more specifically of the phenomenal US ramp-up in oil and gas production, refining activity and petrochemical output unleashed by the shale miracle in the last few years, may thus paradoxically be, in some ways, heightened energy vulnerability."

Second, we see that free market policies -- including those most commonly targeted for scorn by nouveau-populists -- can actually bolster an economy's ability to withstand or adjust to shocks, regardless of their origin. In this case, having ample (private) storage facilities, diverse sources of supply, and robust, active financial markets (even dastardly hedge funds!) has reduced market risk, calmed prices and thus far prevented Laura's damage to the U.S. energy sector from rippling through the rest of the economy. Such measures could (and often do) apply to other essential goods and, if needed, be bolstered by government stockpiles. Combined, they could alleviate the need for onerous government restrictions on private market activities or generous taxpayer subsidies to favored industries, all in the name of "resiliency."

Hopefully, the damage that Hurricane Laura inflicts on the Gulf Coast region will be far less severe than other recent hurricanes. To the extent that Laura does harm American refineries and pipelines, however, freer markets in the United States, along with substantial stockpiles of essential energy products, should continue to cushion the blow. Let's also hope that American policymakers -- especially those worried about free markets and U.S. "resiliency" -- are paying attention.