Terrorism has hijacked American foreign policy. First Al Qaeda and now the Islamic State have come to dominate thinking about international affairs so completely that there is hardly any issue that has not been “terrorized.” Issues that once had significance because they were important in their own right now only matter insofar as they affect the fight against terrorism. Russia? Now discussed primarily with respect to whether their air campaign affects ISIS in Syria. Syria? Important only because of ISIS and other jihadists who want to rule. Iraq? The birthplace of ISIS. Iran? A regional power broker who supports terrorism as whose support for Assad in Syria matters because of…ISIS. Libya, the latest concern du jour? You guessed it: concern for Libya is in fact concern for the growth of ISIS in the country.

The figures below illustrate just how deeply ISIS has infiltrated American foreign policy news. In the first figure, you can see that over the past three years almost every foreign policy topic has taken on a distinct ISIS flavor. As the second figure shows, after reaching a historical high after September 11, news coverage of terrorism dropped steadily in the following years until rebounding in 2013. Attention to ISIS only really took off after June 2014 when ISIS started calling itself ISIS and simultaneously announced the establishment of a global caliphate. 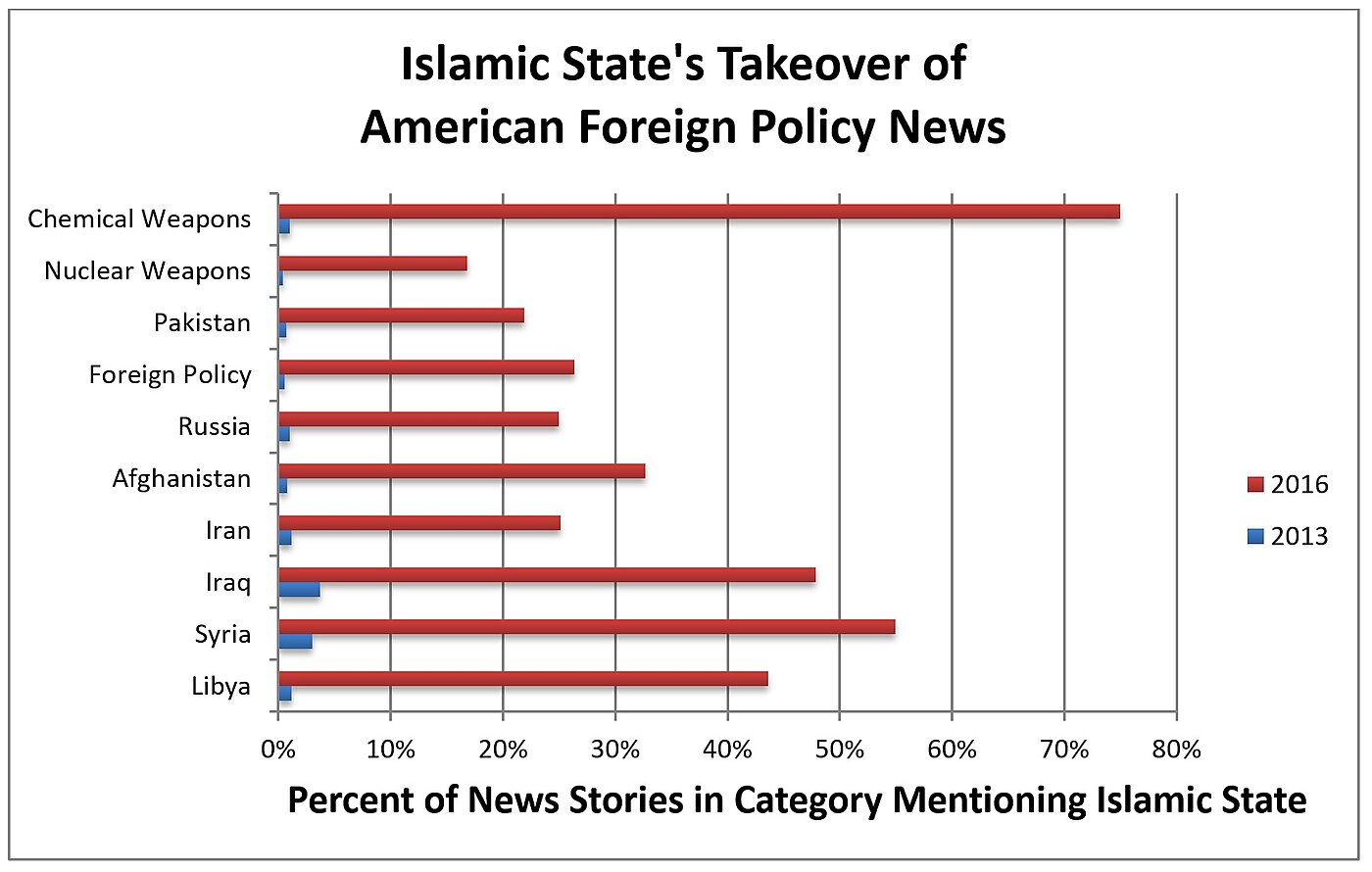 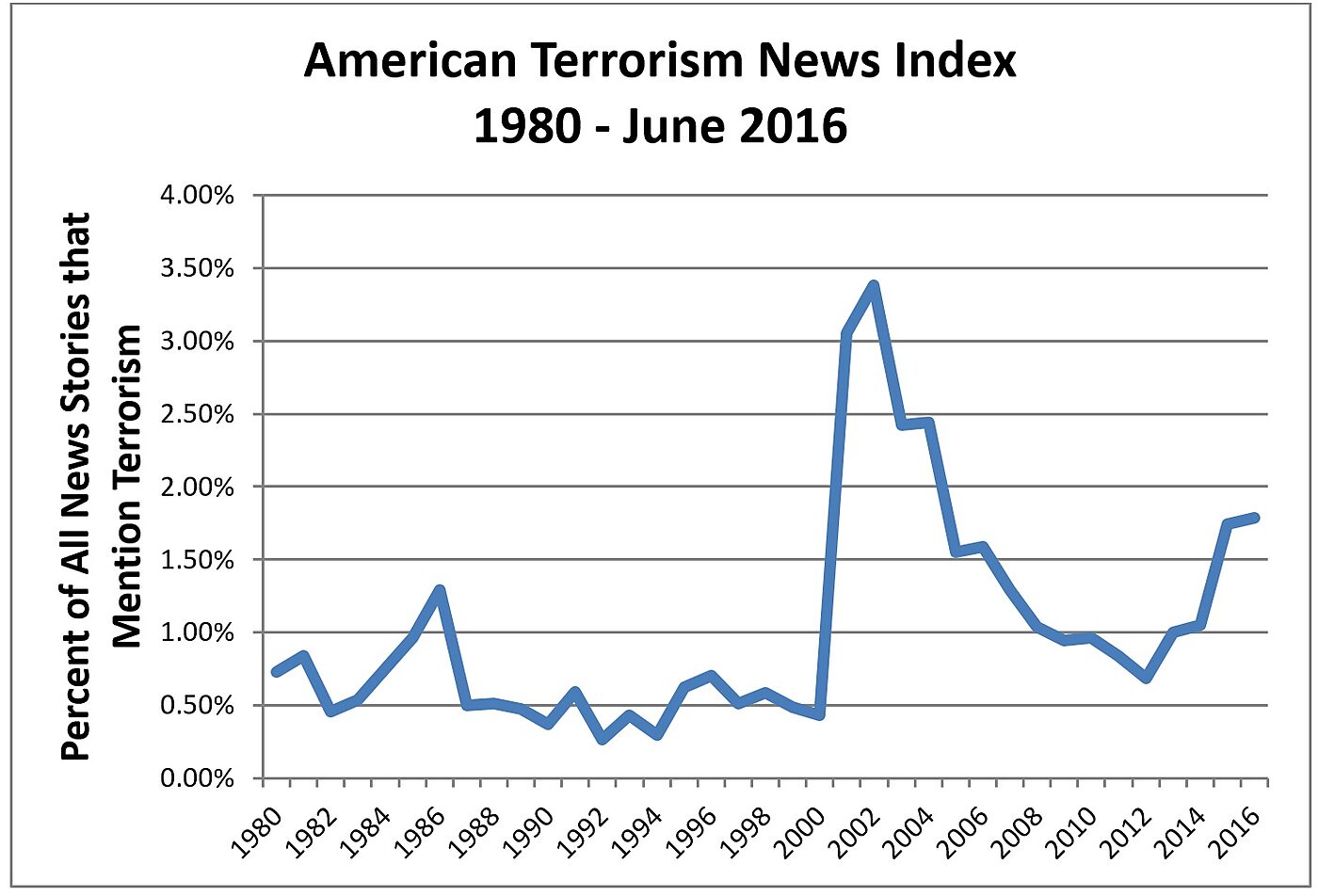 Why should the United States spend so much time talking about ISIS and terrorism? To be sure, the Islamic State is a disaster for the Middle East, but it presents a relatively modest terrorist threat to the United States. And to keep things in perspective, since 9/11, just 78 Americans have died from Islamist terrorist attacks including the 49 who died in Orlando on June 12. None of those, it should be pointed out, were killed directly by members of either Al Qaeda or ISIS. ISIS and the broader problem of Islamist-inspired terrorism certainly deserve attention from both the government and the news media, but at this point, a case can be made that the current hyper focus on it has become dangerously counterproductive.

First, it seems pretty clear that sustained American intervention in the Middle East – and the news coverage that follows – helps spur attacks like the one in San Bernardino and Orlando. If the United States weren’t so closely linked in people’s minds with ISIS, then self-radicalized jihadists like Omar Mateen in Orlando or Syed Rizwan Farook and Tashfeen Malik from San Bernardino would not have found meaning in killing Americans to further the cause of ISIS.

Second, the size of the government agenda is more or less fixed. Every hour the government spends thinking about ISIS is time not spent dealing with other foreign policy issues. Issues of greater importance to the United States than ISIS include the increasingly dangerous dance with China in the South China Sea, nuclear proliferation, the future of free trade, and global health security, just to name a few. Given how much effort the United States has expended since 9/11 to confront terrorism and most recently ISIS, it is staggering to think how much has been left undone on other critical issues.

Finally, the deafening roar of ISIS-flavored news is creating incentives for political leaders to keep doing stupid things in the name of the war on terrorism. To be clear, the news media did not create the ISIS problem. That blame falls at the feet of the bipartisan Washington foreign policy consensus that has dictated endless intervention since 9/11. Once in motion, however, the news media have dutifully amplified the rhetoric of our political leaders, and by now it is almost impossible for anyone to change the conversation or reframe the foreign policy debate.  This reinforcing spiral of government overreaction and media hype have helped pave the way for a series of failed, unnecessary, and/or counterproductive policies from the 2003 invasion of Iraq through the American support of the current efforts in Yemen and Libya. Most recently it has given rise to Trump’s nativist foreign policy screeds.

Much like communism did during the Cold War, terrorism has proven itself an extremely potent rhetorical resource. Political leaders are no more anxious to appear soft on terrorism than they were soft on communism. Afraid of losing votes for seeming unconcerned about the safety and security of the United States, politicians propose one costly and counterproductive strategy after another. Duly reported by the news media, these strategies and their fallout then start the next cycle, reinforcing the same pattern of behavior. Unfortunately, as with the Cold War, it is difficult to see this problem ending until the fires that stoke Islamist-inspired terrorism have burned themselves out.