How the Sharing Economy Can Help Developing Nations

While many sellers and buyers in the so-called sharing economy might like it for its convenience, there is a case to be made that in the developing world decentralized and peer-to-peer economies could help solve a crippling informational problem in environments with weak property rights and bad regulatory regimes.

Writing in Forbes earlier this week, Adam Ozimek, Director of Research and Senior Economist at Econsult Solutions, Inc., pointed out that the rating systems used by companies such as Uber and Airbnb allow for customers to "do what we previously thought tight regulations and even natural monopolies were needed to do." Before the rise of the technologies that allowed for Uber and Lyft to exist, the taxi industry could argue that customers might face rip-offs or safety concerns in the absence of regulation. Thanks to the rating system used by companies in the sharing economy, this informational problem can be overcome.

Ozimek believes that the technologies used by the sharing economy could transform the developing world:

What I think is notable is how much more transformative these technologies should be for the developing world.

In developing countries you can find a lack a (sic) government that functions well enough to provide an effective regulatory regime. In addition, unreliable governance and weak property rights can make it hard to attract the investment required to build large companies with significant reputational capital. But a decentralized, crowd-based ratings system doesn’t require lots of capital investment. It doesn’t require effective regulatory bodies and good governance. It lowers the capital and regulatory bar for the existence of an effective services industry.

After all, in a country with a corrupt government, would you be more confident having a cab driver with a long list of good reviews or one with a bureaucratically issued license?

Of course, the rise of the sharing economy is dependent upon access to the necessary technologies, which many people in the developing world lack. Earlier this year Pew published findings on the use of cellphones and the Internet in emerging nations. According to Pew, in every nation surveyed, smartphones remain a minority of cell phones used. However, these minorities are significant in a number of countries such as China and Lebanon, where 37 percent and 45 percent of people respectively own smartphones.

A Gallup poll  conducted at the end of last year found that in the 62 percent of adults in the United States have access to smartphones with Internet access. 88 percent of Americans between 18 and 29-years-old said that they owned a smartphone.

Ozimek's Forbes post was published on the same day that the U.S.-Africa leaders’ summit began in Washington, D.C. Pew's findings show that the percentage of people who occasionally use the Internet or have a smartphone in the African nations examined ranges from the very low (Uganda at 12 percent) to the comparatively high (South Africa at 43 percent). Pew also found an unsurprising strong correlation between Internet use and national income. 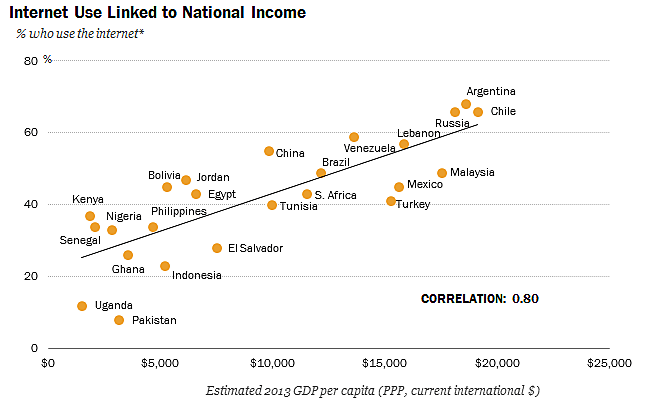 As my colleague Marian Tupy pointed out a few days ago, Sub-Saharan Africa is "one of new millennium’s success stories," with economic freedom and growth in the region resulting in a drop in poverty. Tupy also mentioned that there have been important recent improvements to the social standing of girls and women in Africa, which has become more peaceful since 1990.

Ozimek is right that the technologies used in the sharing economy will overcome the informational problem affecting much of the developing world. However, increased access to these technologies will require economic prosperity and growth, which Tupy pointed out comes about thanks to economic freedom, not aid.