How Much Should Washington Subsidize European Defense? 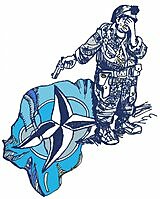 Illustration by John Camejo for the Washington Times[/caption]

In today's Washington Times, I argue that commentators should not take a victory lap---especially for NATO---in the wake of the Libya campaign, and instead should ask what, if anything, the costly commitment does for American security. NATO, I argue,

now constitutes a transfer payment from U.S. taxpayers (and their Chinese creditors) to bloated European welfare states. If the current Washington climate of austerity can serve any fruitful end, surely it should be to reconsider such foolish alliances.

NATO was created to counter the Soviet Union, but its broader purpose in Europe was summed up in an apocryphal quote attributed to Lord Ismay: to keep “the Russians out, the Americans in, and the Germans down.” It helped accomplish those objectives, but not without significant costs. Today the benefits to American national security have disappeared, but the costs to taxpayers remain.

The Libya campaign exposed the alliance’s imbalance. Germany and other NATO members sat out the fight. The U.S. military provided most of the surveillance capabilities, largely via drones, that enabled NATO pilots to bomb Col. Moammar Gadhafi’s loyalists. European air forces ran out of precision-guided munitions and had to come begging for Uncle Sam to provide some. Thus, Washington essentially borrowed money from China to buy ordnance to give to Europe to drop on Libya. The post-Cold War NATO rationale is that we agree to spend and fight and the Europeans agree to support us - sometimes.

Instead of taking a victory lap when Col. Gadhafi falls, American policymakers should consider the fruits of NATO’s decades-long policy of infantilizing its allies. Now that America is broke, Europe is safe and the Soviet Union is gone, American policymakers ought to acknowledge that NATO in the 21st century constitutes a costly commitment with little benefit for Americans.

Whole thing here. And thanks to the Times and its illustrator John Camejo for providing the terrific illustration seen above.