How Many Libertarian Voters Are There?

In our new study, David Kirby and I round up various estimates on the number of libertarian-leaning voters. Our own calculation, 14 percent, is actually the lowest estimate.

We use three questions on political values from the generally acknowledged gold standard of public opinion data, the surveys of the American National Election Studies, and find that 14 percent of respondents gave libertarian answers to all three questions. But other researchers have used somewhat looser criteria and found larger numbers of libertarians:

For more than a dozen years now, the Gallup poll has been using two broad questions to categorize respondents by ideology about economic and social freedom... Combining the responses to these two questions, Gallup consistently finds about 20 percent of respondents to be libertarian. In 2009 they found 23 percent libertarians, along with 18 percent liberals, 19 percent populists, and 31 percent conservatives (9 percent were unclassifiable).

In a 2008–2009 panel study, ANES asked [two] questions... If we define “libertarian”  as those who believe that the federal government should have less effect on Americans’ lives and do less to influence businesses, we get 25 percent of voters—slightly higher than Gallup’s 23 percent...

The results surprised us. Fully 59 percent of the respondents said “yes” to the first question. That is, by 59 to 27 percent, poll respondents said they would describe themselves as “fiscally conservative and socially liberal.”

The addition of the word “libertarian” clearly made the question more challenging. What surprised us was how small the drop-off was. A healthy 44 percent of respondents answered “yes” to that question, accepting a self-description as “libertarian.” 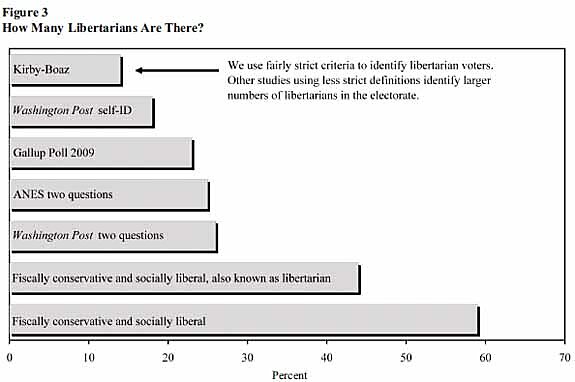