How to Lie with Statistics: Florida School Spending Edition

Activists in Florida found a way to torture the state's education spending data to make appear as though Florida is 50th in education spending. The only catch is that their rather unconventional method ranks Washington D.C. as 51st, despite the fact that D.C. spends nearly $30,000 per pupil, putting it in first place for spending per pupil according to the U.S. Census Bureau (page 11, table 11).

How did they accomplish this literally unbelievable statistical feat? As Patrick Gibbons explains at RedefinED, the activists have inappropriately seized on the U.S. Census Bureau's "education revenues per $1,000 of personal income" figure. Holding all else constant, Florida could improve its ranking using that figure either by spending more on education or by its citizens becoming poorer. Gibbons crunched the numbers to see what it would take to put Florida in 24th place, just above the median, without increasing spending:

To reach the “above average” point on the spending-per-income statistic, Florida would need education revenues of $49.15 per $1,000 of personal income. Without spending a dime more, or less, on education, Florida could boost its ranking to 24th in the nation if its collective income simply shrank by 26 percent.

Florida would become THE POOREST state in the U.S., but we would have above-average education spending – at least according to this misleading metric. Something tells me nobody will be happy with those results.

Embedded in the activists' use of this figure is the odd notion that it costs more to educate students from wealthier states than students from poorer states. Indeed, if every state had exactly the same "education revenues per $1,000 of personal income" then rich states would far outspend poor states, yet I suspect that the activists citing this figure would not be pleased.

The organization peddling this nonsense is not alone. A group clamoring for more education spending in Colorado used the same deceptive tactic in 2012. In just the last year, numerous groups have claimed that their state is 50th in education spending, including the NEA in Arizona, Public Advocates Inc. in California (citing Education Week), an academic in Idaho (citing the U.S. Census Bureau), and a media outlet in Utah (citing the National Center for Education Statistics). Most of these organizations at least have respectable sources upon which to rely. Since the rankers employ varying methods of accounting for spending, groups in numerous states can plausibly claim that they are at the bottom in education spending (unlike the groups in Florida and Colorado). One year, groups in eight states claimed that their state was second-to-last in spending. Many of these groups, including the one in Florida, have sued their respective states in an effort to persuade the courts to force the state legislatures to spend more.

These groups assume that spending more will lead to improved student outcomes, but there is no strong correlation between education spending and performance. Moreover, increasing spending has not consistently yielded improved outcomes, as Harvard University's Paul E. Peterson, Stanford University's Eric Hanushek, and the University of Munich's Ludgar Woessmann found in a 2012 study:

Just about as many high-spending states showed relatively small gains as showed large ones. Maryland, Massachusetts, and New Jersey enjoyed substantial gains in student performance after committing substantial new fiscal resources. But other states with large spending increments—New York, Wyoming, and West Virginia, for example—had only marginal test-score gains to show for all that additional expenditure. And many states defied the theory by showing gains even when they did not commit much in the way of additional resources. It is true that on average, an additional $1000 in per-pupil spending is associated with an annual gain in achievement of one-tenth of 1 percent of a standard deviation. But that trivial amount is of no statistical or substantive significance. Overall, the 0.12 correlation between new expenditure and test-score gain is just barely positive. 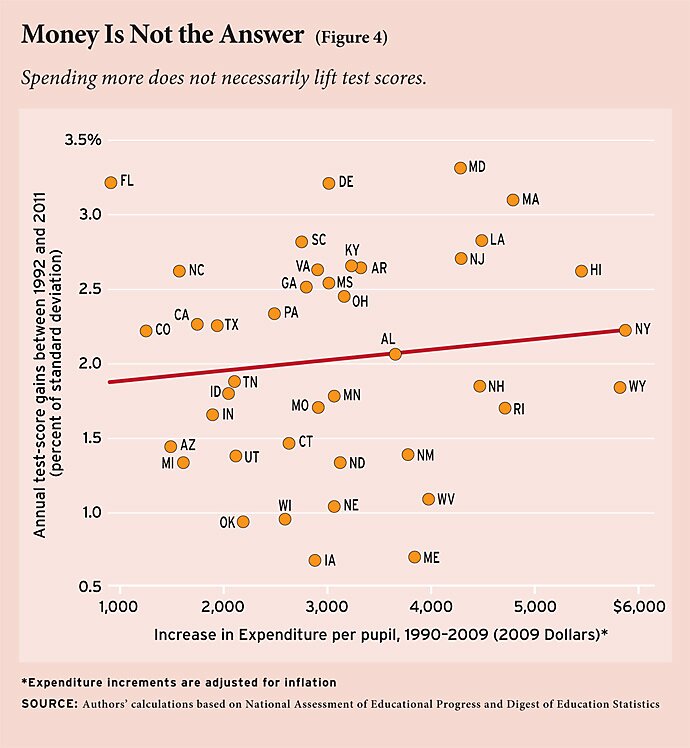 Torture the data long and hard enough and they'll confess to almost anything. The statistical Torquemadas in Florida found a way to make Washington D.C. look like the lowest spender instead of the highest. But as D.C. illustrates, what matters most is not how much is spent but how it is spent.