How Important Is Partisan Identity As an Input to Foreign‐​Policy Views?

As a non-expert who's been reading a fair bit lately on public opinion and war, I'm struck by how essentially no scholars working on voter behavior seem to believe the sort of Civics 101 story about democracy and the marketplace of ideas.  In fact, the idea that voters carefully weigh evidence and arguments and come to independent judgments about national policies appears to be held by exactly nobody.

The University of Michigan's Trevor Thrall and others have argued that partisan political identity played an extraordinarily important role in forming people's views on the Iraq war.  In a very important recent book, Adam J. Berinsky pours cold water on the conventional wisdom view that voter preferences on domestic and foreign policy should be analyzed separately.  In Berinsky's view, the manner in which voters develop views on foreign policy looks a lot like the one whereby they develop views on domestic policy.  And similar to many studies of domestic policy, Berinsky argues that in foreign policy, "in the battle between facts and partisanship, partisanship always wins."

In the current issue of Political Science Quarterly, Gary Jacobson argues [login req'd] that there are particular aspects of the Iraq War and the Bush presidency that caused voters to engage in "motivated reasoning" and to consequently develop "the most polarized distribution of partisan opinions on a president and a war ever measured."  Check it out: 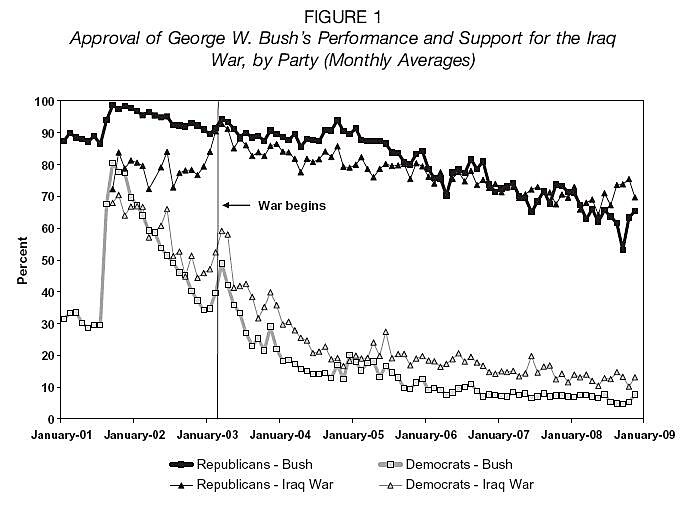 Even granting those particular factors, however, Jacobson writes that, astoundingly,

support for the war was consistently higher among Republicans who did not believe that Iraq possessed WMD, that Saddam Hussein was involved in September 11, or that Bush was chosen by God to lead the global war on terrorism than among Democrats who did believe these things.

Importantly, Jacobson seems to disagree with Berinsky on one crucial point: how and why did Democratic voters come to oppose the Iraq War?  Berinsky argues that even in the absence of Democratic elites making loud, principled arguments against the war in the first place, Democratic voters took their cues from the Bush administration and decided that if Bush was for it, they were against it.  Jacobson tells a different story that is somewhat more like the ideal-typical democratic theory story: Dem voters developed beliefs about the war's premises, which yielded opinions on the policy of going to war, which yielded opinions of the president who was taking the country to war.

I haven't thought enough about these claims--let alone looked at the data enough--to come to judgments about who is right.  Either way, however, the extraordinary salience of partisan identity leads me to believe that things like George Will's op-ed calling for withdrawal for Afghanistan and a recent admission from Reps. Rohrabacher and McClintock that "almost all" their Republican colleagues on the Hill think the Iraq War was a mistake are hugely important developments.